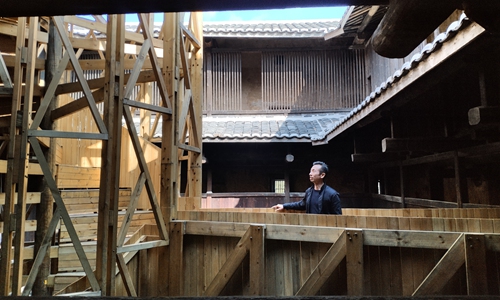 Nine hundred years ago, Chinese built large enclosed earthen “castles” called tulou to guard against enemies. Although it is peaceful now, these earthen structures are still being used as dwelling places. Many of these shining examples of Chinese architectural structures have become World Heritage sites and have attracteda lot of film directors, including the director behind Disney’s live-action Mulan remake, to use them as the setting for film shoots.

“The design was a natural part of human habitation before it became a ‘profession.’ Tulou is an ideal example of collective living and urbanization that I want to share with my students,” John Lin, associate professor of the Department of Architecture in Hong Kong University, told the Global Times.

Lin, who was born on the island of Taiwan and grewup in the US, has a strong interest in human life and culture, which led him to study art, medicine and architecture. For the past 15 years, he has been working in rural areas in China and has carried out numerous renovative construction of traditional Chinese buildings, including tulou, with his students.

“My transition from medicine to architecture was really a change of interest from the individual to society. The goal of medicine is to heal the body, whereas the goal of architecture is to create a community,” he said.

“The first time I visited a tulou area was around eight years ago. At that time I was searching for some authentic examples of traditional buildings that were not designed by ‘architects,’ and I was amazed by the sheer variety and diversity of the types of tulou – each and every one was different. The innovation of rural builders is astounding,” Lin said, explaining that what he saw inspired him to wonder how people in the modern age could ensure that buildings reflect the changing lifestyles of a community and how to preserve the amazing diversity of building types found throughout the vast land of China.

He noted that he has witnessed many changes in China’s rural areas. For example, many rural migrant workers send money back to their villages to build new buildings that are incredibly generic. The lack of innovation when it came to these buildings made Lin and his students realize that the role of the architect in rural areas might still be an important one.

Although rural areas have undergone many changes, one thing that has not changed is their ability to adapt.  Lin and his students were surprised at the capability of villagers to transform and reuse ancient tulou for various purposes such as libraries, recreational centers or schools.

“I think we collectively realized that tulou have always been evolving and changing during their long history. Many of these areas are rapidly urbanizing and have a need for more public amenities,” he said.

After taking the opportunity to work with the government of Longyan, a city in East China’s Fujian Province, in 2019, Lin led his students and some workers in renovating two tulou located in the nearby village of Lantian.

The biggest challenge for them during the renovation was finding a way not to simply preserve the ancient tulou but to help them remain relevant and alive.

Often by installing new toilets, kitchens and greenhouses into these centuries-old buildings, these villages are paving the way for sustainable development that enhances existing culture and maintains the uniqueness of rural areas. This is very different from the models seen in many other rural villages which emphasize outside investment and commercial development. 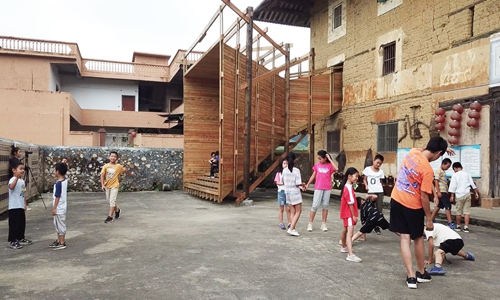 The first tulou that Lin renovated was being used as a summer camp. Lin chose to remove the window of a room on the second floor and build a funnel-shaped wooden staircase that connected the window and the front yard of the earthen structure. The room was transformed into a small public library with the staircase becoming a reading area. The staircase can also act as theater seating when performances are held in the front courtyard of the tulou, making it a great place for locals to come and relax.

The second change they made was to build a large wooden tower in the middle of the circular-shaped tulou. The tower offers people space to sit on the stairs and enjoy a view of the blue sky as well as the earthen building surrounding them. But the entire renovation did not alter the tulou too much. Lin only removed a few railings in its corridors which wouldn’t affect the structure of the 300-year-old earthen building.

In Lin’sview, renovating an old building means making the fewest changes while achieving the maximum effect, just like what acupuncture does fora human body.

After the renovation was completed in the summer, the number of visitors to the tulou increased significantly and some people indicated they were interested in making an investment to turn another tulou into a hotel or afamily inn. Lin said this made him very happy since more people were showing an interest in these long-vacant buildings and his students were beginning to understand the principle of collective work and living that is so fundamental to rural areas.

The designs for the tulou earned Lin the AR New into Old Award from The Architectural Review, an international architectural magazine in the UK, in 2019.

“I think it is remarkable that our project was the smallest and cheapest! It was a humble project. It goes to show that good design can happen under any conditions,” he said.

After renovating the tulou, Lin realized that many of the sustainable ideas they learned from the villagers are not about technology but about a “suitable and sustainable” lifestyle. He pointed to the underground houses in Sanmenxia, Central China’s Henan Province, as an example. In the spring and fall, some families live aboveground, but during the winter and summer they move underground where the earth walls keep the roomwarm. Paradoxically, providing these villages with new concrete houses cannot really improve their quality of life, which brought Lin to the conclusion that only by combinating good design and good architecture cannot really improve people’s lives.

Lin said he believes that tourism and urbanization are important and necessary for the further development of China and that this process begins from the rural areas. He noted that he thinks China’s cities have grown increasingly similar and that rural heritage areas are becoming “museums” only set aside for tourism and largely exist to benefit urban dwellers. He feels this is a problem, however, since the true culture of China still resides in rural areas, which can be seen from the diversity of buildings and lifestyles across the country. In his opinion, rural development should focus on these areas as a complete ecological system rather than be limited to just renovating old buildings.

He said nowadays, people are interested in leaving the city to experience the way of life in rural areas. This should not become merely a backdrop or an aesthetic interest he feels, instead it should allow people to experience the real community and traditional life that cannot be found in urban areas.

True development should not only benefit urbanites but also strengthen rural communities. Development projects should engage and employ local craftsmen and try to strengthen local economies. By finding this balance, even more successful and sustainable cultural projects can be created.

“Culture is always being created and always changing. By connecting traditional and modern ways of life, we can allow our culture to evolve and develop,” Lin said.