President Xi Jinping will pay a state visit to Myanmar from January 17 to 18 at the invitation of Myanmar President Win Myint. The first overseas trip of Xi in 2020 and the first visit by a Chinese president to the Southeast Asian country in 19 years, Xi’s trip comes on the 70th anniversary of the establishment of diplomatic ties between the two countries.

For China, Myanmar is a friendly neighbor and a key player in the China-proposed Belt and Road Initiative (BRI). China hopes to open up its strategic gateway to the Indian Ocean by developing infrastructure in Myanmar, such as railways and expressways. However, marked by the suspension of the Myitsone Dam in 2011, China-Myanmar relations encountered many challenges in the early stages of Myanmar’s political transformation. With the cooling-down of political reform and change in dynamics at home and abroad, Myanmar’s National League for Democracy (NLD) has gradually started to realize China is a source of help for Myanmar’s development. To develop Myanmar’s fledgling economy and win the next election, the NLD needs more support from China, which makes its China policies more practical. Hence, as relations get better, both sides continue to advance cooperation.

During Xi’s visit, leaders of both countries will summarize the historical interactions and map out the blueprint for future development. China adheres to the principle of noninterference in Myanmar’s internal affairs. Also, it fully supports Myanmar’s efforts in pursuing its own development path based on its condition, protecting its rights and national dignity, and maintaining its stability. When it comes to the conflict between Myanmar’s government and rebel organizations, China plays a constructive mediation role. Both countries will jointly follow the Five Principles of Peaceful Coexistence, support multilateralism, protect free trade and contribute to the establishment of a new and equitable international relationship.

Additionally, issues related to quality cooperation on the BRI and construction of the China-Myanmar Economic Corridor (CMEC) will also be included in the discussion between both leaders. In December 2017, Xi and State Counselor of Myanmar Aung San Suu Kyi reached an important agreement on the construction of CMEC within the framework of the BRI. Since then, CMEC has entered the fast track. Both countries signed the Memorandum of Understanding on the project in September 2018. Only two months later, the Myanmar government formed a steering committee for the implementation of the BRI chaired by Suu Kyi.

CMEC includes cooperation in infrastructure, Border Economic Cooperation Zone, cultural exchanges and the Digital Silk Road. Although with a clear development direction, there are plenty of political, economic and security obstacles ahead, such as the uncertainty of Myanmar’s transformation, lack of trust, difference in development concepts, interference from outside forces, and instability along the China-Myanmar border. China needs to strengthen its communication with Myanmar’s central and local governments over polices, enhance the integration of the BRI with Myanmar’s development planning, and focus more on the projects related to people’s livelihood and cultural exchanges. Besides, Chinese cities should connect with Myanmar’s cities, thus promoting the construction of Myanmar’s economic zones.

CMEC and other cooperative projects have helped create jobs in Myanmar, largely improving the living conditions. For example, the completion of China-Myanmar pipelines not only solves the sales problem in Myanmar’s natural gas market, but also expands employment. Currently, China is Myanmar’s largest trading partner.

Cultural exchanges will also be an area of interest. In recent years, cooperation in health care and education has deepened, so have people-to-people exchanges. There are Myanmar students receiving Chinese scholarships and studying in China every year Strong links between both sides’ museums, libraries and art academies have been established. In 2018, China is the largest source of foreign visitors that visited Myanmar.

Neighboring countries have been one of the top priorities in China’s diplomacy. National development is the driving force shared by both sides. How to unravel the entanglement with neighbors is for both countries to resolve together. Building a China-Myanmar community with a shared future requires joint efforts of both sides.

Even though protectionism and unilateralism are rising, China and Myanmar are still injecting positive energy into win-win cooperation. The long-term mutual support between both countries fully explains the true meaning of “Paukphaw” or brotherhood. Xi’s visit will endow a deeper connotation of the times into this term.

The author is a professor at Center for China’s Neighbor Diplomacy Studies and School of International Studies, Yunnan University. opinion@globaltimes.com.cn

The Myanmar-China Friendship Forest was jointly planned and constructed by the Chinese Embassy in Myanmar and the Naypyidaw Municipal Committee. It is planned to plant more than 3,000 species of rosewood, teak, and mahogany in four years. After completion, it will be open to the public. 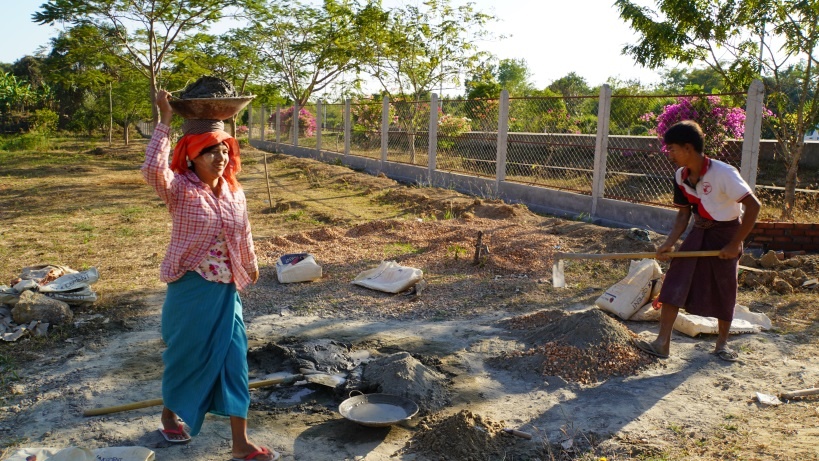 The pictures show Myanmar workers working in The Myanmar-China Friendship Forest near the park in front of Naypyidaw International Conference Center on January 12.