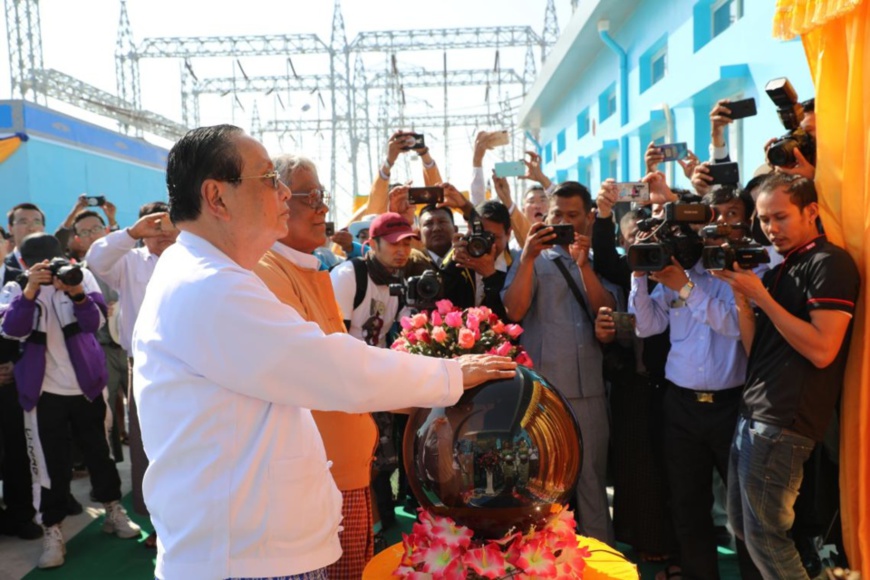 The Myanmar government and industries attach high importance on the joint construction of the BRI between Myanmar and China, U Win Khaing added.

The Myanmar government formed a steering committee for the implementation of tasks relating to the BRI in Dec. 2018, aiming to better implement the affairs related to the China-Myanmar Economic Corridor (CMEC) under the BRI framework, coordinate the union government and state and region governments, and better guide relevant policy making.

The 27-member committee is chaired by State Counselor Aung San Suu Kyi. Vice-President U Myint Swe serves as vice chairman and other ministers and regional chief ministers are the members.

Power cooperation is the sector that the minister attaches the most importance on. Myanmar has a weak foundation of power infrastructure, and the increasing power consumption in recent years further burdened the electricity supply of the country.

Chinese enterprises have assisted Myanmar in building many power generation and transmission projects, such as the Kyaukse, Myanmar 145MW Gas Fired Power Plant, as well as the Thaketa gas-fired combined cycle power plant in Yangon. These projects have largely improved the power supply and power quality across the country.

U Win Khaing told People’s Daily that by Dec. 2019, 50 percent of the regions in country have had access to electricity, and the figure is expected to reach 100 percent by 2030.

U Win Khaing believes that as an important part of the BRI, the cooperation on power infrastructure has injected sufficient energy into Myanmar’s economic development and livelihood. The east line of the CMEC, or places in the Mandalay-Yangon region, are the most economically developed places in Myanmar. The CMEC, by connecting the poorest and the most developed region of the country, will largely drive Myanmar’s economic growth.

“The joint construction of the BRI is bringing development opportunities for Myanmar, and I hope the two sides will conduct cooperation in a wider range,” U Win Khaing noted.

He believes that President Xi’s visit will open up new space for cooperation for the two countries to jointly build the BRI, adding that Myanmar will actively learn from other BRI countries so as to bring more tangible benefits to its people.