County leader goes all out online to sell products

A Chinese rural government official is proving that not all bureaucrats are boring with little personality after he imitated a leading online sales blogger with a hilarious, fast-talking sales pitch that helped sell a million yuan ($143,600) worth of local agricultural products.

Wang Shuai, deputy leader of Shanghe county in Jinan, East China’s Shandong Province, gained fame for his exaggerated online sales pitch during which he eats four packaged cooked chickens in a short video that was posted on social media.

His video had more than 3 million views as of Wednesday afternoon, January 1, and he has 219,000 followers on TikTok.

“The most delicious braised chicken ever! … The outer packaging takes my breath away … What a royal taste … Amazing!” rants Wang in a spot-on imitation of Li Jiaqi, a well-known online pitchman for cosmetics. Wang even throws in an “Oh my God!” in English.

Wang’s talent became obvious during his first live-streaming sales pitch in May 2019, when he sold 200 watermelons in 10 seconds, Liu told media.

“He’s a good example of how grass-roots government leaders can advance with the times,” said a netizen whose post received many thumbs up on social media. 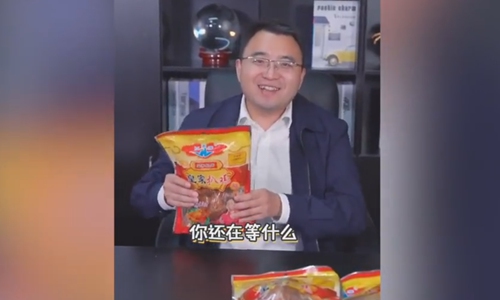