Chinese films and TV series are gaining popularity in Myanmar. The TV series dubbed into Burmese, including A Dream of Red Mansions, Journey to the West, Jin Tailang’s Happy Life and Marriage Battle, have been broadcasted in the Southeast Asian country. This demonstrates closer cultural affinity between the two countries and a new chapter of friendship between the two peoples.

Last August, a well-known Chinese classic TV series A Dream of Red Mansions dubbed into Burmese started to be broadcasted in Myanmar. The TV series was first screened in China in 1987.

The broadcasting of the TV series vividly demonstrated the close cultural ties and achievements in cultural cooperation between China and Myanmar, said Chinese Ambassador to Myanmar Chen Hai.

After the introduction, a launching ceremony for Chinese TV series Journey to the West and Romance of the Three Kingdoms dubbed into Burmese was held in Yangon, which had thrilled numerous fans in the country.

In 2013, under the promotion and coordination by China’s National Radio and Television Administration, Jin Tailang’s Happy Life in Burmese was aired during prime time on the MRTV. Without language barriers, the Chinese TV drama marked an annual event for China-Myanmar cultural exchanges.

After that, translation and dubbing of Chinese TV series had been accelerated in Myanmar. Romance of Our Parents was aired in 2014 in Myanmar and Turbulence of the Mu Clan in 2015.

In 2016, China Radio International established a film and TV translation base in Myanmar, which not only boosted dubbing of Chinese films and TV series in the country on a regular basis, but also provided a new platform for in-depth cooperation between the two countries’ mainstream media.

The broadcasting of excellent Chinese TV series with contemporary themes on the MRTV was to let people of Myanmar learn about China’s social status and development, the MRTV Director-General U Myint Htwe said.

In recent years, Chinese TV shows are being extensively broadcasted in Myanmar as their popularity increases in the process of growing affinity between the two peoples.

On Aug. 8, 2017, “China Hour”, a TV program operated by China International Television Corporation, was aired in Myanmar. It became the first Chinese TV program regularly aired on a main channel of the MRTV. The debut drama dubbed into Burmese, the Cage of Love, was hotly discussed by local people, reaping a watching rate of 3.98 percent.

More than 10 days later, the TV program “Chinese TV Plays” co-launched by China’s Guangxi Broadcasting Service and the MRTV was officially aired on the MRTV.

The photo shows a snapshot of the TV series A Dream of Red Mansions first screened in China in 1987.

The photo shows a snapshot of the TV series Jin Tailang’s Happy Life. 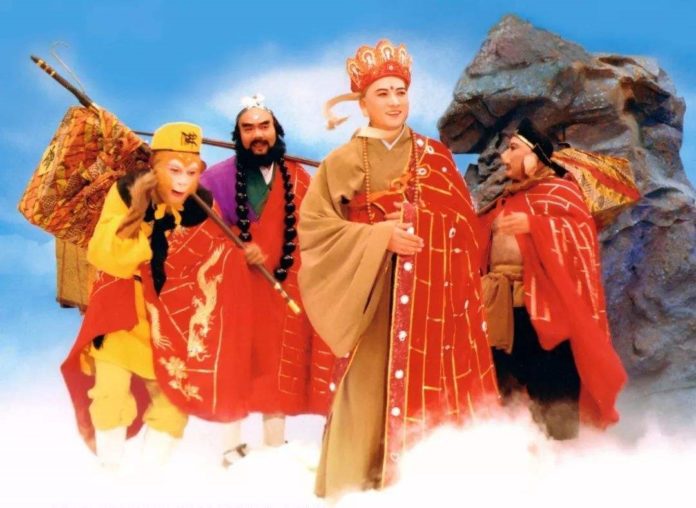 The photo shows a snapshot of the TV series Journey to the West.