Washington (People’s Daily) – As China faces economic challenges due to the outbreak of the coronavirus, International Monetary Fund (IMF) Managing Director Kristalina Georgieva issued a statement expressing her support for Wuhan on Thursday.

“I want to wish everyone from China and many other Asian countries who celebrate the Lunar New Year a very healthy and prosperous New Year. It is the Year of the Rat, which symbolizes strong vitality, agility and intelligence,” said Georgieva in the statement.

“For China, the Year of the Rat has begun with a challenging start as the country is battling the coronavirus outbreak. On behalf of all IMF members, employees, and management, I would like to express our deep sympathies to those affected by the serious situation related to the coronavirus,” Georgieva said.

“We support China’s response efforts by taking measures with the strength of its healthcare system, but also with recent fiscal, monetary, and financial actions. We are confident in the resilience of China’s economy,” Georgieva added.

“Zhong Guo jia you, Wuhan jia you!” she said in Mandarin. The English translation is “Go China, go Wuhan!” IMF China Executive Director Jin Zhongxia thanked Giorgieva’s support for China during the coronavirus outbreak and presented her with calligraphy artwork that read, “Spring comes back to Earth.” (Photo: IMF)

IMF Executive Director for China Jin Zhongxia met Georgieva on the Lunar New Year, and the two discussed the virus outbreak which has claimed over 300 people, and has led to the implementation of emergency medical measures and travel restrictions while also rattling markets.

Georgieva said last week that on the economic front, the first to be impacted would be the travel industry and global supply chains.

“The immediate impact is obvious. We have travel, tourism, manufacturing in China and a little bit beyond China may initially be impacted. China has taken very dramatic actions to restrict the spread of the virus and work is underway on a vaccine. So, let’s say for this quarter there will very likely be a negative impact. What would happen beyond this quarter we must observe and assess,” she said Thursday at the Center for Global Development. 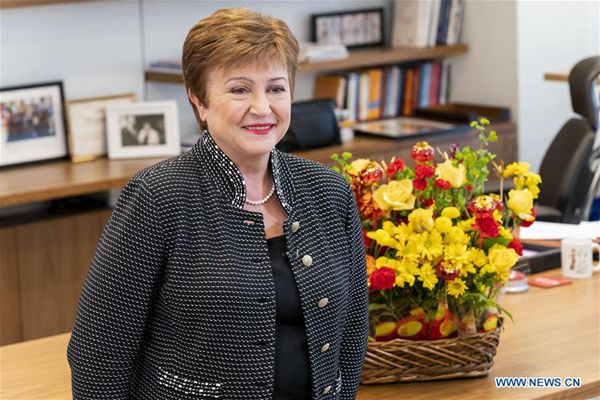