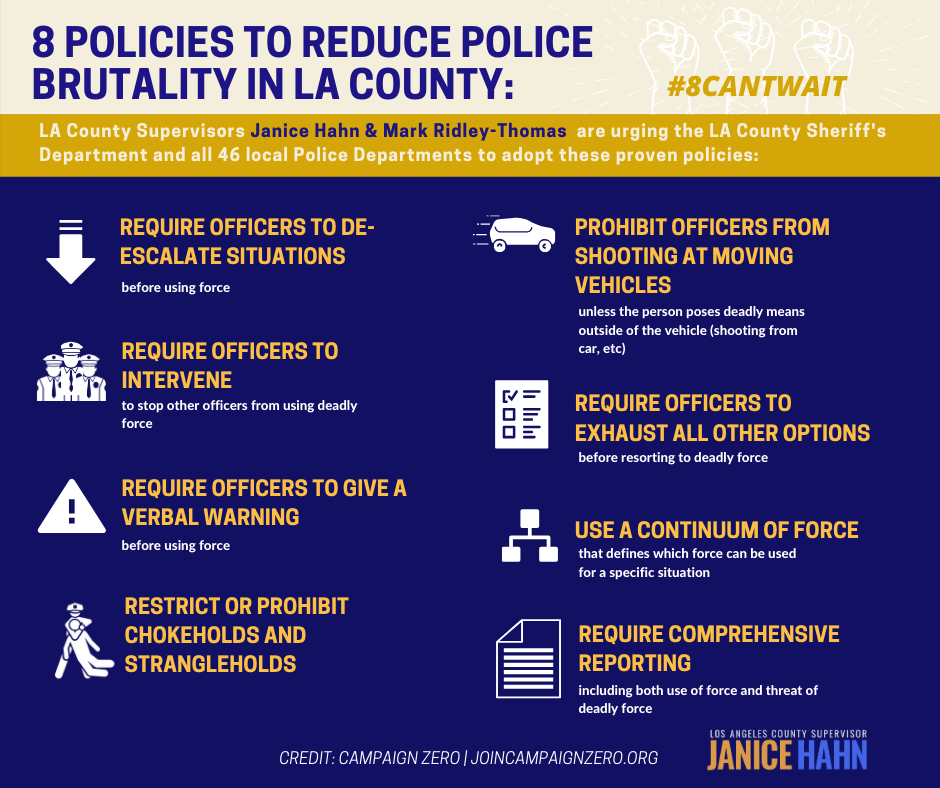 Los Angeles, CA—Los Angeles County Supervisors Janice Hahn and Mark Ridley-Thomas want the Los Angeles County Sheriff’s Department and the county’s 46 local police departments to update their Use of Force policies to include eight policies proven to reduce the number of people killed by police. These eight policies have been put forward by Campaign Zero, an advocacy group led by DeRay Mckesson, Samuel Sinyangwe, and Brittany N. Packnett Cunningham which has published vital research on police practices and is developing data-driven policies to end police brutality.

In a motion filed today by Hahn and Ridley-Thomas, the Supervisors are urging the Los Angeles County Sheriff’s Department and the 46 local police departments in the county to review their use of force policies and adapt them to include the following eight policies outlined by Campaign Zero:

A 2016 analysis by Campaign Zero found that each of these eight reforms was associated with a 15% reduction in police killings for the average police department, and departments that implemented more than four of the reforms saw the largest reduction in killings.  Importantly, departments with more restrictive use of force policies also experienced lower rates of assaults on officers and officers killed in the line of duty.

“The people are demanding change,” said Supervisor Janice Hahn. “These are eight steps that can be taken right now by all of our law enforcement departments that are proven effective in reducing the number of people killed by police and sheriff’s deputies. Most of the police departments in LA County have already implemented one or two of these policies, but no one has implemented all eight.  I am calling on our Sheriff and all of our local police chiefs to update their use of force policies to include these important restrictions to use of force.  We cannot wait any longer.”

“The killing of George Floyd once again exposes the harsh reality that the African-American community has to endure in our country. We will not accept this injustice,” Supervisor Ridley-Thomas said. “I believe that the eight reforms identified by Campaign Zero in this motion give us specific and clear changes to reduce the use of force by law enforcement that has resulted in this senseless violence. I urge dozens of police agencies in the County to adopt the policies immediately.”

While there are law enforcement agencies in Los Angeles County that have made significant steps toward reform, no local law enforcement department has adopted all eight of these policies. The Los Angeles County Sheriff’s Department, for example, does not include chokeholds in their training practices. However, chokeholds, strangleholds, carotid restraints, and the knee-on-neck hold that killed George Floyd are not explicitly prohibited in department policy.  Additionally, requiring the reporting of threats of use of force is one of the reforms associated with the highest reduction in police killings, but neither the LASD or Los Angeles Police Department require this type of comprehensive reporting.