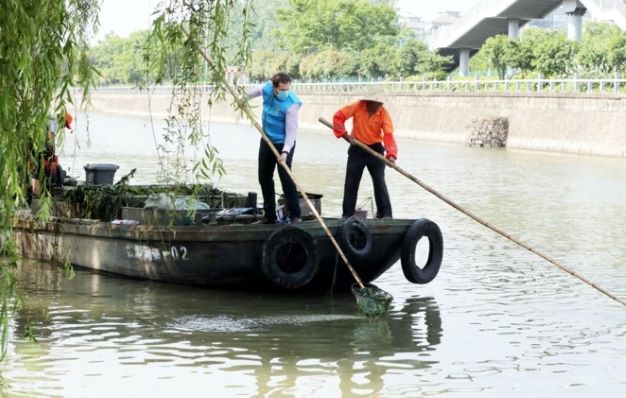 Renaud, a French volunteer serving as the chief of the Zhutianpu River in Zhangpu township, Kunshan, East China’s Jiangsu Province, collects trash on the river on June 4. Photo by Hua Xuegen/People’s Daily Online

That is a question raised by Xie Ling in February 2018, who then had just took office as the Party head of Zhangzhenqiao village in Wuxi, East China’s Jiangsu Province, and a “river chief” of the Qinglingqiao river.

She came to the village with a plan provided by Wuxi Municipal Design and Research Institute Co., Ltd., under which many unapproved riverside structures in the village should be demolished.

“The chicken sheds, duck sheds and tofu workshops by the river have caused heavy pollution and some sections of the river even began to stink,” Xie said, adding that “We have no choice but to remove these structures.”

Xie’s proposal was immediately rejected by Hu Rongqing, a villager who built a livestock farm near the river. “My family depend on the farm for a livelihood,” he argued.

However, Hu was opposed by another villager who said his business had intensively polluted the environment of the village. Soon, other villagers chipped in, starting a heated debate.

Then, the village committee director sent for Hu’s cousins to help persuade him. Under their persuasion, Hu gradually calmed down. Later, Xie promised to find a job for Hu to dispel his worries over the source of income.

Hu pulled down his farm half a month later. With the help of Xie, he secured a job at Jiangsu Wenhui Steel Engineering Co., Ltd., earning an annual income of nearly 100,000 yuan (about $14,283). Recently, the man has become more energetic and motivated as his boss promised to raise his salary.

Villagers participated in water management with greater enthusiasm as they saw Hu became better-off and the river was also cleaner. Under the mobilization of the river chief, they would volunteer to help dredge waterways, come rain or shine, making no complaints even when they are splashed with mud.

Two years’ efforts of the villagers have led to great achievements. “The stinking ditch has evolved into a river with fish and shrimps, just like in my childhood memories,” said Zhang Jinzheng, a 78-year-old villager, adding that now residents can get spiral shells in the river for food.

China established a comprehensive river chief system in June 2018, marking a new stage of the country’s management and protection of rivers and lakes. Over the past two years, the system has gradually taken effect.

The unremitting efforts of river chiefs and the people who have participated in the cause contributed to such a transformation.