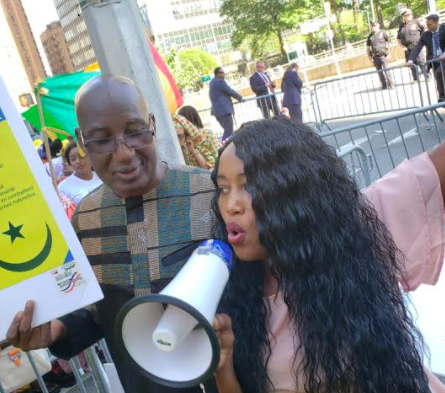 Fleeing persecution in Nigeria, arriving in the United States, Pastor Ben said he was immediately taken into detention. “I was told I would see the judge in two weeks,” the time stretched to “five years and two months only because I asked for asylum at the airport.”

Pastor Ben was a panelist at “From Africa to Deportation: Black Africans Confront the U.S. Asylum System,” an Interfaith Immigration Coalition forum on challenges asylum seekers face in America.

Co-hosted and moderated by Sylvie Bello, Cameroon American Council, and Jennie Guilfoyle, Immigration Justice Campaign, the event explored the reasons leading to the desperate journeys by those seeking relief from harsh and sometimes life-threatening scenarios. The forum exposed the disdain and misery to which Africans are subjected in American prisons.

As Guilfoyle noted, ICE’s technically termed detention facilities, “they’re really prisons.” She said they fuel “the deportation machinery” and are typically located in rural, remote areas that make it difficult to find available immigration attorneys, translators, or interpreters nearby. Detainees hail from across Africa, including Guinea, Democratic Republic of the Congo, and of late, Cameroon.

Bello concurred. “They apply for asylum; they seek legal support and with almost no interpreters that are culturally sensitive and language appropriate for African languages and religions.” She contended that judges’ lack of empathy, unfamiliarity with local conditions that spur asylum requests, and impatience with the claimants are hallmarks of the judicial process.

Pastor Ben became a jailhouse lawyer, studied in the law library, learned Spanish and became familiar with other languages so he could help inmates: “Africans, Mexicans, Latinos – name it, different people from different countries… help them look for a lawyer and things like that.”

As many immigration prison facilities are owned by for-profit companies, Pastor Ben said there is likely a correlation with the lengthy stays asylum seekers endure. From the start of the Trump Administration in 2017, ICE awarded contracts of $480 million to GEO and $331 million to CoreCivic — America’s two largest private prison corporations.

Overcrowding puts detainees at high risk for nfectious disease transmission even while they endure poor food and an abysmal quality of medical care. “Being in that detention system, there is no human dignity,” Pastor been said.

Guilfoyle said the Trump administration’s continuing dismantling of the asylum system makes it almost impossible to qualify for asylum. Given the politicization of ICE’s workforce and administration, solving these issues will require a reorientation “with justice and with dignity — which is very much missing right now,” she said.

“They are not criminals and should not be treated that way,” insisted Houleye Thiam, a social worker in Columbus, OH, and president of the Mauritanian Network for Human Rights in America. Ohio hosts the largest number of Mauritanian immigrants in America. According to Thiam, they fled a highly racialized society where the ruling minority of lighter-hued Mauritanians, primarily of Arab descent, impose a second-class citizenship upon the Black majority and even slavery on some.

For Bello, solutions to the inequities Black African asylees face include revamping U.S. foreign policy. African asylees are often fleeing regimes that have “a lot of heavy militarization backed by the U.S. government.”

She advocated supporting U.S. politicians who demand domestic policy reforms, as well. “The Muslim ban is the African ban,” she said, by way of example. “Travel bans for Africans have always been part of this immigration system which is based off a racialized anti-Black system that permeates throughout America.”

Decrying the forced hysterectomies of 16 immigrant women in Georgia’s Irwin County Detention Center, Bello was heartened that nurse and whistleblower Dawn Wooten is African American. Bello lauded Rep Sheila Jackson Lee, D-Texas, members of the Congressional Black Caucus and others who got involved in response to the story. “Black women have been all over this,” Bello said.

She sees the racial reckoning in America intertwining the lives Black Africans and African Americans. Opal Tometi, a co-founder of Black Lives Matter, is the daughter of Nigerian immigrants, Bello said, adding that “one out of five Black babies born in America today has an African parent or grandparent.”

“Why is it that immigration justice consistently fails to look at anti-Blackness within its system?” Bello asked. She described journeys by foot, car, bus, train, and plane, sometimes through as many as eight countries to arrive at America’s southern border, “and then facing deportation and detention, and a lot of times facing death in the U.S. immigration system.”

The South Georgia Immigration Network was among the entities that helped Pastor Ben to gain release from incarceration, but his case is pending. Meantime, he feeds the homeless, helps other detainees, and occasionally preaches. “I was released on supervision after the District Court ordered ICE to release me because of prolonged detention.”

“An ICE officer told me that he would deport me. I asked him, ‘Why would you want to deport me when I fear for my life? If you send me back, I’m going to get killed.”

“It really broke my heart that another fellow human being would know that death is waiting for you and they still want to force you and send you back there.”