TRUMP LIES ABOUT HIS TREATMENT OF MIGRANT CHILDREN 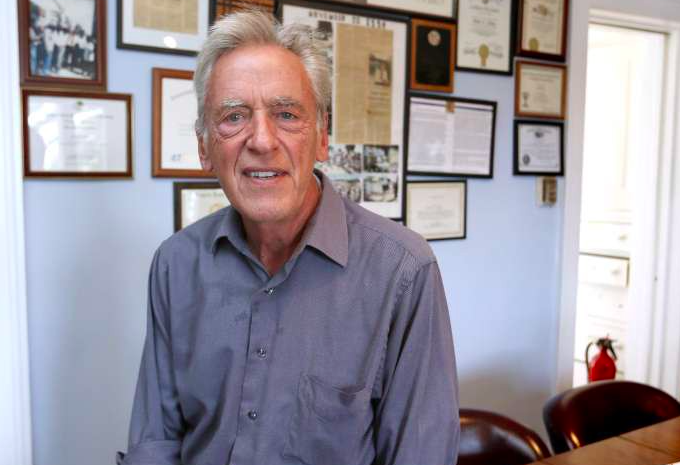 Editor’s Note: Peter Schey (above), President and Executive Director of the Center for Human Rights and Constitutional Law and its Casa Libre/Freedom House program, is lead counsel in the lawsuit on behalf of detained migrant children.

During the most recent debate in Nashville on October 22, President Trump was not unexpectedly asked about his administration’s 2018 fiasco when thousands of young immigrant children were forcible separated from their parents upon apprehension near the border. This unbelievably cruel and brutish policy was operated jointly by the Department of Justice and Department of Homeland Security. This was no rogue operation. Operation “Zero Tolerance” was something President Trump owns.

When asked about his Zero Tolerance policy during the debate, here’s what President Trump said: “Children are brought here by coyotes and lots of bad people, cartels, and they’re brought here and it’s easy to use them to get into our country.” This statement was entirely false.

We have represented thousands of children detained with accompany adults and in well over ninety-five (95%) percent of the cases children were accompanied by their parents or other close relatives, not coyotes or members of “cartels.” During the Zero Tolerance program, almost every accompanying adult forcibly separated from a child was the child’s parent.

These parents were most often trying to save their children from the most dangerous and lawless countries in the world: El Salvador, Guatemala, and Honduras.

According to the World Bank, to put the magnitude of the problem in context, the entire population of Central America is approximately the same as that of Spain, but while Spain registered 336 murders in one year studied, Central America recorded 14,257 murders. UNICEF puts it simply: “Pervasive violence and poverty drive desperate Central Americans to migrate in search of safety and a better life.

Mr. President, these mothers and fathers trying to save their children from rampant violence and abject poverty are not “coyotes” and “lots of bad people.” Nor are they part of the “cartels,” as you falsely claimed. In fact they are fleeing violent cartels and gangs, and corrupt law enforcement agencies, in no small part created by years of U.S. support for or tolerance of authoritarian dictators, widespread corruption, and endemic poverty in the region.

Even the CIA, which President Trump ignores whenever its views don’t support his political interests, says: “El Salvador is beset by one of the world’s highest homicide rates and pervasive criminal gangs.”

About Guatemala, the CIA says: “one of the poorest countries in Latin America and the Caribbean, having highly unequal incomes and chronically malnourished children, beset by political insecurity.”

Honduras does not fare much better. The CIA summarizes the situation as follows: “Honduras is one of the poorest countries in Latin America and has one of the world’s highest murder rates. More than half of the population lives in poverty and per capita income is one of the lowest in the region.”

We all know that Trump’s favored migrants are attractive young women from eastern Europe, and white immigrants from western Europe. But to tarnish Mexican migrants as “drug dealers, criminals, rapists,” and Central Americans fleeing violent countries with their children as “coyotes” and “lots of bad people,” is ridiculous balderdash. He knows it’s not true but says it anyway to justify a horrific policy that has punished and harmed thousands of innocent children.

But that’s not all the President said. It got worse. He claimed the detained children “are so well taken care of. They’re in facilities that were so clean…”

Hundreds of detained minors we’ve interviewed provided sworn declarations describing being locked up in overcrowded and unsanitary cages or prison-like camps, provided insufficient food and drinking water, not getting medical attention when sick, and being exposed to a range of communicable diseases. Children have died on their cell floors after being left alone for hours as their illness worsened. Three children died from flu-related complications, one died of a massive bacterial infection, and two died from chronic conditions they had before crossing the border that were ignored while they were in federal custody. Mr. President, these children were not “so well taken care of.” They died thanks to your heartless separation and detention policies.

The federal courts and outraged public opinion have been the only bulwarks against President Trump’s willingness to separate children from their parents and detain migrant children for long periods of time in unsafe conditions. The federal courts have repeatedly ordered the Trump administration to release children who are not a danger or a flight risk, and when not released to detain them in humane conditions.

The primary protection detained children have today against prolonged detention and inhumane treatment is provided by a settlement agreement we reached in 1997 in a case still pending in the courts and now called Flores v. Barr. The court-approved Flores agreement provides children with the right to safe and sanitary conditions in licensed group homes while detained, and to prompt release to relatives living in the U.S. While President Trump professes concern for the well-being of children detained by his administration, he is at this very moment fighting in the federal court of appeals to terminate the rights that the Flores agreement extends to detained children.

President Trump’s administration’s careless attitude toward children goes beyond its separation and detention policies. In August 2019, ICE officers swept through workplaces in Morton, Mississippi, rounding up about 700 immigrant workers. Children walked home from school to find their homes locked and their parents missing. Volunteers set up a shelter for the children at a local gym. A local journalist reported that most children were “devastated and crying for their parents,” and were too traumatized to even eat meals provided by volunteers. President Trump’s response? “This serves as a very good deterrent…I just hope to keep it up.”.

The United Nations Convention on the Rights of the Child entered into force on September 2, 1990. States Parties undertake to ensure children such protection and care as is necessary for their well-being. The United States government contributed to the drafting of the Convention. It has signed the Convention but is the only United Nations member state that is not a party to it.

Arch-conservative Senator Jesse Helms, the former chairman of the Senate Foreign Relations Committee, described it as a “bag of worms,” an effort to “chip away at the U.S. Constitution.” It seems President Trump and former senator Jesse Helms share a common view when it comes to children’s human rights.

Nelson Mandela once said: “The true character of a society is revealed in how it treats its children.” President Trump’s true character is revealed not only in the brutish manner his administration has treated young migrant children, but also in how he persistently lies about it.