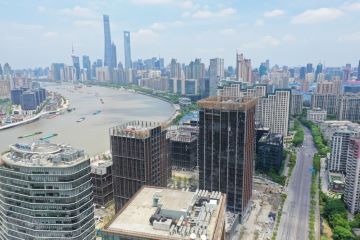 An aerial photo taken on May 22 shows the construction site of an office building project at the Binjiang Avenue in Pudong, Shanghai. The project represents the largest commercial building complex along Binjiang Avenue. Photo by Shen Chunchen/People’s Daily Online

Since 1994, Yao Jianliang, a native of Pudong New Area, Shanghai, has taken photos of Lujiazui financial hub in Pudong every year from the same angle on the Oriental Pearl Radio and Television Tower, trying to record every change in Lujiazui.

Yao’s photos have been displayed at an art exhibition marking Pudong’s 30th anniversary of development and opening-up, and attracted a lot of attention.

In his very first photo, Lujiazui was still filled with low-rise buildings with greenish- brown roofs, which seem like mosses clinging to the earth.

Back then, Yao doubted the government’s vision for turning Lujiazui into an international financial and trade zone.

Covering merely an area of 31.78 square kilometers, it has gathered more than 10 national factor markets and functional financial infrastructure, over 6,000 various financial institutions, and more than 300,000 financial talents.

Lujiazui has become one of the areas with the most abundant financial factor markets, the most concentrated financial institutions, and the most active financial transactions in the world.

However, the management of the zone is still working hard to further enhance the hub’s global asset allocation function.

“Our goal is to develop it into a world-class financial center, just like the Wall Street of New York and the City of London,” said Zhang Yuxiang, director of Lujiazui administration bureau of China (Shanghai) Pilot Free Trade Zone Administration.

Although Pudong initiated development and opening-up about 30 years ago, it took off from a higher starting point. It aimed at carrying out economic dialogues with the world leisurely from the beginning.

Located to the east of the Lujiazui Financial and Trade Zone, Zhangjiang Science City, a landmark of integrated circuit and biomedicine industries, is now putting more efforts into the development of artificial intelligence (AI) industry.

The Zhangjiang AI Island located in the central area of Zhangjiang Science City started to attract investment over one year ago and has already drawn over 90 enterprises, including multinational giants like IBM and unicorn companies such as Cloudwalk.

The rise of the Lujiazui Financial City and the Zhangjiang Science City is only a small part of the miracle Pudong has created in its 30 years of development and opening-up.

Shanghai has made Pudong the core area in the city’s endeavor to build an international center of economy, finance, trade, shipping, as well as technology and innovation.

In March this year, J.P. Morgan Securities (China) Co., Ltd. officially opened on the 49th floor of Shanghai Tower in Pudong and became one of the first batch of newly established foreign-owned securities companies in the area.

Pu Xueqian, chairman and CEO of the company, said that he didn’t expect the company could settle in Pudong successfully so soon.

The reason for the happy surprise is that the China (Shanghai) Pilot Free Trade Zone has taken the lead in formulating and implementing measures to respond to major measures of China to further expand the opening-up of the financial industry.

China’s door of opening-up will not be closed and will only open even wider, said Chinese President Xi Jinping at the opening of the Boao Forum for Asia Annual Conference 2018 on April 10 that year.

Xi solemnly declared China’s determination to expand opening-up and announced a series of major measures concerning opening-up to the world in his keynote speech at the forum.

The next day, financial institutions such as the People’s Bank of China, the China Securities Regulatory Commission and the State Administration of Foreign Exchange promptly published specific measures to expand opening-up.

By rolling out 25 specific measures involving six aspects, including implementing new policies to attract foreign financial institutions, it has supported and guaranteed the implementation of major opening-up measures of China for the financial service industry.

Over the past 30 years, Pudong has attracted a total of $102.95 billion in foreign investment, gathered 36,200 foreign-funded enterprises from 170 countries and regions and become home to regional headquarters of 350 multinational companies.

Meanwhile, 346 out of the Fortune Global 500 companies have invested projects in Pudong.

It is generally acknowledged that the legend of Pudong’s development relies on reform, opening-up, and innovation, which profoundly demonstrates that reform and opening-up plays a vital role in determining the fate of contemporary China.

Pudong is ready to shoulder its new mission and march toward a new journey.