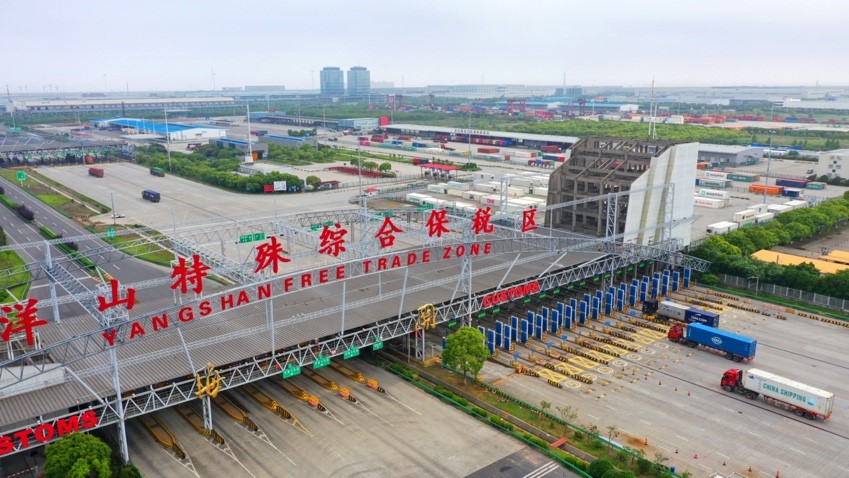 Pudong in East China’s Shanghai, home to the country’s first bonded zone, the first free trade zone (FTZ) and the Lingang special area, a special economic function zone, is always committed to deepening reform and opening-up as a pioneer that makes new explorations and advances with the times.

As China decided to open up and develop Pudong in 1990, the first area in China under special customs supervision – Shanghai Waigaoqiao FTZ was established, placing Pudong on a critical position in China’s international commerce.

“We were trying not to get our hopes up when we submitted the proposal to establish a trading company here,” said Moritsune Taka, general manager of Itochu (China) Holding Co., Ltd. According to him, Itochu Shanghai Ltd. has become a regional headquarter of the corporation. “Thanks to the opening-up and development of Pudong, we are rooted and developing here,” he told People’s Daily.

The establishment of FTZs is a strategic measure of China to comprehensively deepen reform and expand opening-up under new circumstances, and Shanghai and Pudong shouldered the important mission of establishing China’s first FTZ.

At the first China International Import Expo (CIIE), Chinese President Xi Jinping demonstrated China’s firm resolution to expand opening-up, and announced to expand the China (Shanghai) Pilot FTZ to include a new section, launch a science and technology innovation board at the Shanghai Stock Exchange and experiment with a registration system for listed companies, and support integrated development of the Yangtze River Delta region and make it a national strategy.

A big part of the Lingang Special Area of China (Shanghai) Pilot FTZ is in Pudong. Since the inauguration of the area in August 2019, 46 of the 78 policies and institutional innovations in line with the overall plan for the development of Lingang have been implemented. Twenty-two of them have been made into schemes, attracting total investment of over 310 billion yuan ($46.86 billion).

Pudong issued China’s first negative list of foreign investment access on the second day of the inauguration of the China (Shanghai) Pilot FTZ, which included 190 items of special management. Over the past years, only 30 items remain on the list now.

Apart from the negative list, Pudong has also applied a registration system for foreign investors, thanks to which it only takes foreign investors a day to establish a company in the area, while the process used to take more than a week. At present, over 95 percent of foreign-funded enterprises are established in Pudong under the registration system. So far, a series of basic and core institutional innovations have been formulated in Pudong, including the negative list and a “single-window system” for foreign trade.

Pudong has been making continuous efforts to expand the fields of opening-up. On one hand, it is opening wider its service and manufacturing industries, issuing 54 opening-up measures in 2 batches for over 3,500 enterprises. Fifty-five projects in wholly foreign-funded hospitals, automobile manufacturing and vocational training implemented in Pudong were the first of their kinds in China. On the other hand, Pudong is also enhancing the opening-up in its financial sector. It launched China’s first free trade account system in 2014, which offered a testing platform for the opening-up of the financial industry and met the demand of enterprises to integrate their domestic and foreign trade businesses. So far, the total overseas financing in both RMB and foreign currencies received by enterprises under the system has hit 2 trillion yuan.

“The process of reform and opening-up in Pudong is beyond our expectation,” said Pu Xueqian, chairman and CEO of J.P. Morgan Chase Securities China.

Today’s Pudong has become a prioritized destination for more and more multinationals to locate their headquarters in. This year, the world’s largest industrial software provider Dassault Systemes moved its Asia Pacific headquarters to Pudong. At present, the area is home to 350 headquarters of multinational corporation, and many enterprises have upgraded their single-function headquarters into compound ones that integrate the functions of investment, management, trade and settlement.