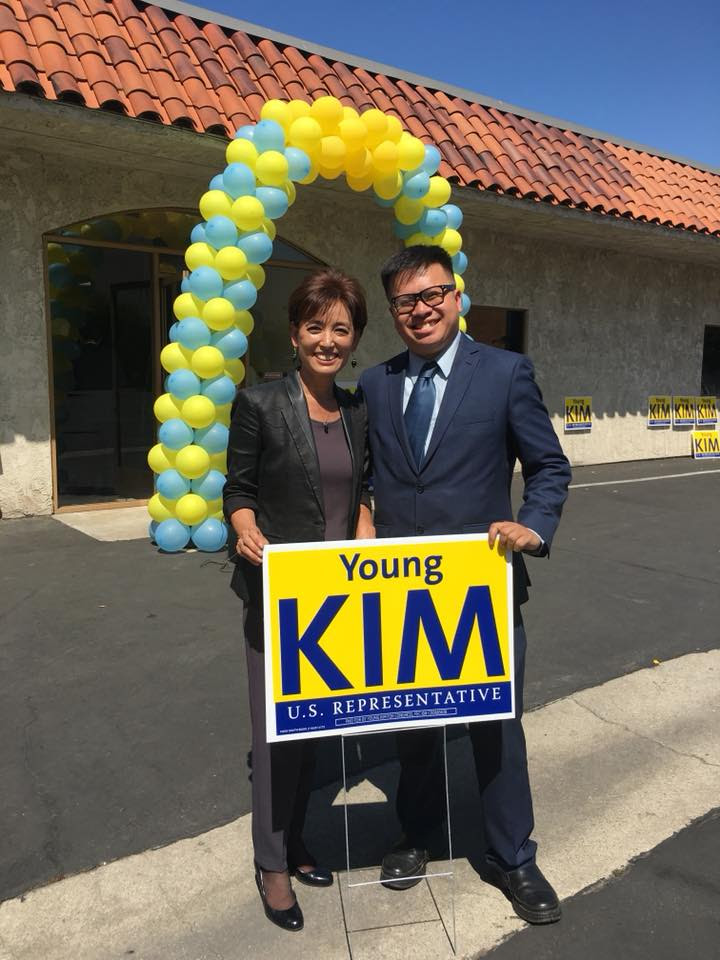 Marc Ang says, “We want to give a whole-hearted congratulations to our beloved Young Kim for fighting the good fight and prevailing in a quest to provide fitting representation to the 39th district’s conservative values. In addition, Young did the impossible: flipping a California Democrat seat back to Republican, which hasn’t been done in over 20 years. Congresswoman-elect Kim overcame her unfortunate narrow 2018 loss, which was in part, due to California’s low-quality and poor voter roll data that got scrubbed after the 2018 election, especially in Los Angeles County. Young didn’t let that stop her and she ran again, building on her relationships with various church communities and identifying the fight against racism towards Asian minorities, exacerbated by the racist Prop 16, which targeted Asian Americans and went on to a landslide defeat.  After being disappointed in 2018, I encouraged Young to run and it was our organization’s primary goal to work with culturally niche churches in her district to promote Young Kim’s values that are consistent with the church and the various immigrants-community morals. This was successful in moving our minority communities to the right, as a whole and documented nationwide from wins in Orange County all the way to West Texas and Miami-Dade, Florida.  Young will be in great company with other incoming minority conservative freshman like our other good friend, Michelle Steel, Maria Elvira Salazar and Burgess Owens.”

Over the last two years, Asian Industry B2B has hosted targeted educational and faith based events promoting school choice and building community and energy in church groups, who are increasingly silenced. AIB2B focused on working with at least 25 churches that spanned over the counties of Los Angeles, San Bernardino and Orange, mostly in the 39th Congressional District, which Young now represents.

Marc Ang added, “We made it a priority to teach parishioners that Democrats are taking away church rights, as evidenced by forcing the closure of our religious services during Covid19, as well as exposing how the Democrats are using legislation to suppress minority opportunities with racist measures like Prop 16. AIB2B helped organize faith-based events and Young Kim was often a featured speaker. These community events were instrumental in her election to the US Congress and for that, we are honored and proud.”

During the church lockdown by the Democrat-led California state government, AIB2B and other low-income minority churches were unfairly targeted with gathering citations even though they met strict CDC social distancing guidelines.

AIB2B’s October event in Walnut, CA, a family fair at a church, was the target of harassment by the LA County Health Department leading up to and at the actual event. This was documented live and heavily covered by ABC, NBC, Telemundo, OC Register and national publications like Breitbart and Epoch Times. Past rallies were covered by Fox News National, CBS, KCRW, Asian Journal and lots of independent media. Other events including one of Asian Industry B2B’s members efforts putting up Hollywood-style Trump signs all over California (some taken down on private property, such as the Getty pass 405 one) have been covered extensively by media as well.

The unjust actions by state regulators ignited church members to organize church ‘Get Out The Vote’ events organized by Marc Ang to support Young Kim as an outlet of frustration.

Marc also states about election integrity, “The victory by Young is also evidence on the importance of shining the light on and to audit our election process. By the mandates to scrub their voter rolls, we saw the end of over 100 percent voter participation over registered voters, which is ridiculous on its face. Young’s margins in LA County are making more sense and she is the true fit for her district.”