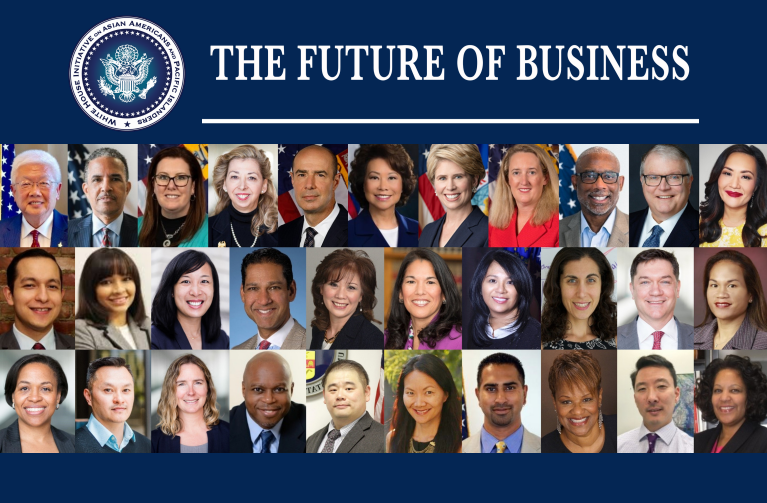 “As we emerge from the virus’ commercial impacts, our economy continues to advance through the recovery period,” said Secretary Ross, Co-Chair of WHIAAPI. “We’ve seen reassuring changes in the financial markets, in real GDP projections, and in the workforce. These are important indicators that we are holding to a steady pattern of economic recovery. The U.S. Department of Commerce will continue to create opportunities with WHIAAPI and our federal partners that encourage expanding trade and investment, drive American innovation, and spur economic and job growth.”

“Asian Pacific Americans have historically had the lowest unemployment rate of any group. Since many Asian Pacific Americans are entrepreneurs and small business owners and many are in the service industry, our community has suffered disproportionately,” said Secretary Chao. “These events will provide helpful information to AAPI entrepreneurs and employers on federal resources to build a more prosperous future, especially during those daunting times.” Secretary Chao, along with the President’s Advisory Commission on Asian Americans and Pacific Islanders (PAC-AAPI) Chairman Dr. Paul Hsu, began this event series with opening remarks on the October 1st event. This event featured an informative presentation on Government Procurement Tools, Resources and Opportunities for AAPI-owned Businesses with the U.S. Department of Transportation’s Office of Small and Disadvantaged Business Utilization (OSDBU), U.S. Department of Commerce’s OSDBU, and the U.S. Small Business
Administration.

“When we speak of a great American success story, we are often referring to people who themselves or whose families originally weren’t even from America. They were drawn here by the freedom and opportunity this country provides and used that freedom and opportunity to achieve great things. So many Asian Americans and Pacific Islanders have come to exemplify that American dream,” said Secretary Scalia. “Asian Americans and Pacific Islanders have contributed mightily to the economic prosperity of our nation and we are right to recognize these contributions.” The session with the U.S. Department of Labor highlighted Helping Businesses Succeed and Workers Stay Safe through this health pandemic. The Occupational Safety and Health Administration (OSHA) and the Wage and Hour Division (WHD) shared their agencies’ recent enforcement and robust assistance work around new rules and regulations to assist the businesses and workers.

“I am committed to supporting the White House Initiative on Asian Americans and Pacific Islanders—and Asian American and Pacific Islander increased business success though exporting around the world. This initiative showcases federal resources and opportunities and I am very glad you will learn about the tools the Export-Import Bank of the United States has available to you, including through our Office of Minority- and Women-Owned Businesses,” said EXIM President and Chairman Kimberly Reed. “As the economy recovers and reopens after COVID-19, EXIM can help you not simply return to normalcy but achieve your greatest success ever in the months and years ahead.” Also joining this session to provide updates from the PACAAPI was Commissioner Prem Parameswaran of New York.

“We are the only agency in the federal government that has one mission and one mission alone, and that is the growth and competitiveness of minority-owned businesses,” said Mr. David Byrd, the National Director of the Minority Business Development Agency (MBDA) on the importance of MBDA to the AAPI community. Joining him were three of the MBDA Business Centers and two of the newly established MBDA Inner City Innovation Hubs, all of which reside in areas of the country with large pockets of AAPI communities. MBDA shared how it has supported MBEs through the challenges of the pandemic and announced their new STEM initiatives through the Innovation Hubs.

Assistant Administrator, Sery Kim of the U.S. Small Business Administration Office of Women’s Business Ownership (OWBO) provided an inspirational discussion on Empowering Women Entrepreneurs, alongside two of the PAC-AAPI Commissioners, Ms. Jan-Ie Low of Nevada and Ms. Keiko Matsudo Orrall of Massachusetts. There was also a session with the Director of the Office of Space Commerce on the future of space business, building a diverse workforce, and OSC’s plans for new initiatives to reach MBEs. Also joining that conversation was PAC-AAPI Commissioner Grace Lee of Michigan. More recently, we had a session with the U.S. Patent and Trademark Office on expanding the innovation ecosystem and the new National Council for Expanding American Innovation (NCEAI). Ms. Laura Peter, the Deputy Under Secretary of Commerce for Intellectual Property and Deputy Director of the USPTO, providedthe keynote remarks, which was followed by several presentations and a Q&A session on resources from USPTO for entrepreneurs and innovators.

WHIAAPI plans to continue The Future of Business series to highlight more opportunities and resources from other federal partners. Previous events were recorded and are available for viewing at www.mbda.gov/aapihm2020 and on WHIAAPI’s social media accounts.