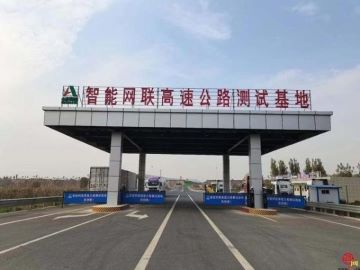 A highway test base equipped with intelligent technologies is launched on Jan 6 in Jinan, Shandong province. [Photo/e23.com]

A highway test base equipped with intelligent technology was launched on Jan 6 in Jinan, Shandong province.

The base, which is supported by Shandong Hi-Speed Group, is located at the interchange of the Baoshan-Miaoshan section of the former Binzhou-Laiwu Expressway.

After the reconstruction and expansion of the Binzhou-Laiwu Expressway, the section is no longer used for public vehicles, but serves as a closed test base instead.

The base has established cooperation with more than 10 enterprises such as Sinotruk, Dongfeng Trucks and Baidu to promote the D&R of self-driving technologies.