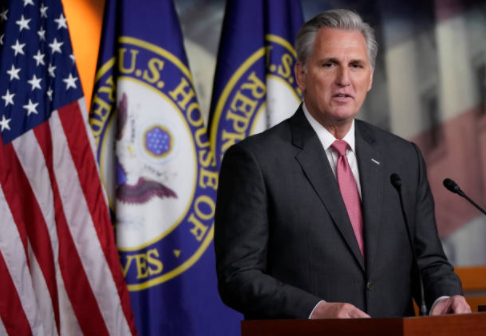 House Minority Leader Kevin McCarthy (above) is one of seven California Republican Congressmen that are facing calls for expulsion due to their objection to the certification of the presidential election results.

Editor’s Note: The seven pro-Trump Republicans supported the decertification of the November elections and a coalition of grassroots activists of color in their districts want them out.

Grassroots activists from the districts of seven California Republican Congressmen who last week objected to the certification of the Presidential elections results called for their expulsion for seeking to “erase the votes” of people of color which they said were “the result of organizing and not fraud.”

“One of the common lies being told around the country in regard to fraud, especially across conservative outlets, is that they…can erase black women, black and people of color who make up a significant portion of the voting block in the state of California”, said Pablo Rodríguez, executive director of Communities for a New California based in California´s Central Valley.

The activists said the seven may not be kicked out of Congress, but added that they will work to empower more voters in the districts they represent so “we can turn them blue,” said Tina McKinnor of LA Voice Action, a grassroot inter-faith group from Los Angeles.

“With their support for not certifying the election results, these representatives joined in the lies to disenfranchise voters,” said Chris Rice-Wilson, from the Alliance San Diego Mobilization Fund. “The record votes we saw in our communities wasn´t the result of fraud but of organizing efforts”.

Michael Gomez Daly, executive director of Inland Empire United, based in San Bernardino, said that he´s ashamed of his congressman Ken Calvert but pointed to other local officials who “share conspiracy theories on social media.”

Irene Kao, executive director of Courage California, a progressive online activism network, said that even though President Trump has been impeached and suffered politically “punishing him won´t be enough when these congressmen still have two years in office to continue pushing the insurrection he started.”