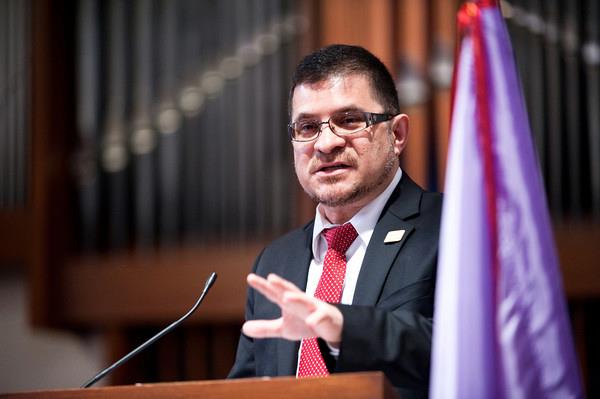 Opinion/Analysis – Ricardo Corzo Moreno (pictured above) is a theologian specializing in Latino churches, and former president of the Multi-Ethnic Group of the Presbyterian Church in the United States. He served as director of Latino relations for Bread for the World from 2005 to 2015.

Samuel Rodriguez, president of the National Hispanic Christian Leadership Coalition (NHCLC), led a prayer at President Trump’s 2016 inauguration. He has since become a great ally and advocate for the president and the most visible Latino evangelical face among Trump’s evangelical advisors.

In early 2020, Trump decided to begin his campaign at El Rey Jesus Mega Church in Florida, led by the Apostle Guillermo Maldonado, a Honduran immigrant, one of the 10 largest Hispanic evangelical churches in the United States that brings together hundreds of mixed-status families, citizens, legal residents and undocumented immigrants.

Trump’s press secretary, Kayleigh McEnany, told the Miami Herald that choosing this church “comes naturally because the Apostle Maldonado is a strong supporter of the president,” reflecting the enormous support President Trump has in the broader evangelical community.

“It is not only logical, but politically brilliant, that the president will begin campaign 2020 by launching the evangelical outreach of his reelection in a Latino megachurch in the state of Florida.”

“I just wanted to see what was really happening. To my surprise, I saw something drastically different from the stories I heard in our national speech. Even as a veteran immigration advocate in the United States, I was surprised by the misinformation about the crisis at the border”.

In an interview with the EFE news agency about the president’s chances for re-election, he said:

“A large majority of Latinos in the U.S. will support the re-election of President Donald Trump and will do so in historic percentages regardless of the president’s anti-immigrant stance. Let’s say that, if the Latino vote in 2016 was significant, in 2020 it will be a vote on steroids.”

After the victory of Joe Biden and Kamala Harris, and in the face of Trump’s lawsuits, Rev. Rodriguez has been silent. It appears that he made the political calculation that this was the appropriate move in case Trump’s lawsuits failed to reverse the election results, as happened.

And then came the planned insurrection of January 6 where a Trump-instigated mob forcibly invaded the Capitol and forced a suspension of the congressional session that was affirming the electoral college votes. That day, five people died in the violence, including a police officer who was attacked by the insurgents.

The assault on the capitol involved extremists such as the Proud Boys and proponents of pro-Trump conspiracy theories such as Q-Anon. However, little attention was given to the fact that some assailants identified themselves with Christian symbols.

One of the insurgents carried a banner that read: “A Proud American Christian”; another waved a white flag with the word Ichthys painted in the colors of the flag, an image of a fish used by ancient Christians as a symbol of their religion.

Both are examples of Christian symbols that some participants in the insurrection used as justification in the assault on the building that symbolizes American democracy.

Not all of the assailants were Christians, but many with conservative religious beliefs have been dangerously mixed with a militant nationalist Christianity in which theological and eschatological themes have been manipulated by conservative leaders in support of Trump.

The syncretism of evangelical faith and conspiracy theories with political extremism is dangerous. It was evident the day before the attack when hundreds of Trump supporters gathered near the capitol building to perform “The March of Jericho” — a reference to the biblical account of the siege of the ancient city of Jericho under the leadership of Joshua, when the Israelites surrounded the city, marching and blowing trumpets. At the end of seven turns the walls that protected the city collapsed, according to the Bible.

At the march of Jericho in Washington DC and during the invasion of the Capitol, several journalists described the slogans of some of the participants:

“This is our moment Lord, to take back our country”, “God you are our shield and you are our strength”, “We fight for God and God fights for us”.

Authorities have found videos on social networks of people who are now detained clearly indicating religious and nationalist motivations for participating in the attack on the capitol.

An article from the Christian Post posted by Rev. Rodriguez on his Twitter account reports that on the first Sunday after the assault on the Capitol, Rev. Rodriguez preached at New Season Church in Sacramento California – where he is pastor – and told his congregation:

“America needs to hear a message of repentance. We all need to repent, even the church needs to repent for making the person who occupies the White House more important than God.”

Just as Christ warned of those who look at the speck in their brother’s eye and do not see the beam in their own, Rev. Rodriguez calls for prayer and repentance by the evangelical church. He made no mention of the four years he supported Trump and claimed to represent thousands of Latino churches and pastors.

I have great respect for conservative evangelical pastors despite theological or political differences, whether Republicans or Democrats. However, I have lost all respect for those who, like the Rev. Samuel Rodriguez, or the Apostle Guillermo Maldonado, allow the evangelical faith to be used by a white, racist and nationalistic superiority agenda.

They gave Trump “moral coverage” and “Latino representation” in exchange for access to the White House, photos with the president, and ephemeral political fame with the media. And even after the irrationality and violence unleashed by the events on Capitol Hill, they still maintain silence and dare not denounce Trump and his actions or publicly call for his resignation or dismissal.

It is time for other conservative Christian leaders to denounce the religious hypocrisy of their colleagues, and for journalists to check their sources carefully and not take for granted everything they are told in an interview or press release.