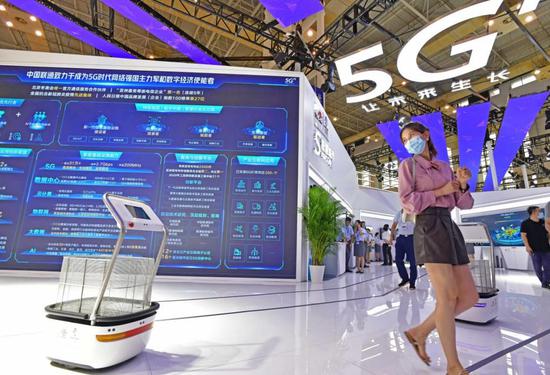 On Jan. 24, an eight-hour-long 5G webcast featuring two giant pandas from the Dujiangyan Base of the China Conservation and Research Center for Giant Pandas located in southwest China’s Sichuan province attracted a large number of viewers from both home and abroad.

“Don’t worry if you feel you haven’t got enough of them,” said Zhang Ji, an executive of China Telecom’s branch in Sichuan province, explaining that the Sichuan branch of China Telecom, one of the three major telecom operators in China, would officially launch a one-year-long online tour around Sichuan two days later.

China has built the world’s largest 5G network, indicate statistics from the country’s Ministry of Industry and Information Technology (MIIT).

As of the end of 2020, China had achieved 5G full coverage in all cities above the prefecture-level.

The Beijing-Chengde high-speed railway, which connects China’s capital city and Chengde in north China’s Hebei province and started operation on Jan. 22, has been fully covered by 4G network. Passengers can even use 5G network in some sections of the railway.

The communication network along the high-speed rail has been jointly constructed and shared by various operators in China.

“We prefer to share rather than build new ones where there are already network facilities, and jointly build new facilities with other operators rather than all on ourselves whenever we can,” said an executive with China Tower, a participant in the construction of the communication network along the Beijing-Chengde high-speed railway.

According to the executive, 194 newly built base stations for the network covering the Beijing-Chengde high-speed railway are shared by two or more operators, and all the indoor network infrastructure in the tunnels and stations along the way are constructed by one operator and shared with others, saving costs by over 36 million yuan (about $5.6 million).

5G is rapidly entering the daily lives of ordinary Chinese people. By the end of June 2020, China had built 66 million 5G terminal connections. The number exceeded 200 million as of the end of last year.

5G mobile phones have become more and more popular because of their decreasing prices, which dropped from over 5,000 yuan when 5G smartphones were first launched to as low as about 1,000 yuan nowadays, said Wang Zhiqin, deputy director of the China Academy of Information and Communication Technology (CAICT) under the MIIT.

In 2020, China’s shipments of 5G mobile phones reached 163 million units, and a total of 218 new models of 5G phones were rolled out, according to Wang.

China is witnessing a “zero-to-one” breakthrough in the integrated application of 5G in various industries. The application is expected to become a major driver of high-quality economic growth, said Wang.

Meanwhile, over 60 hospitals in 19 provinces in the country used 5G network in telemedicine services, and new business forms and models such as those combining 5G network with self-driving technology, smart grid, and distance learning continued to emerge.

5G technology is playing an increasingly significant role in empowering economy, benefiting society and serving the people and is becoming an important driving force for high-quality economic growth, said Zhao Zhiguo, director of the cybersecurity management bureau of the MIIT.