KEEPER OF THE FLAME – MYANMAR GAZETTE 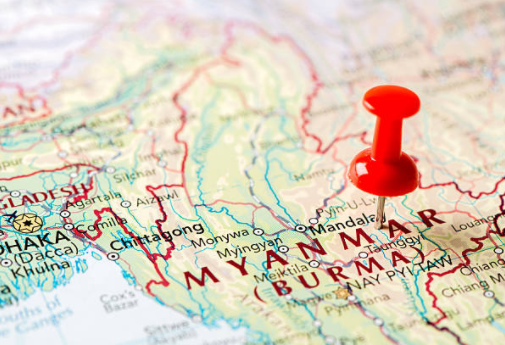 By Julian Do, EMS

Thakhin KaiBwor, publisher and editor of the Myanmar Gazette, has a unique mission: to provide news and information while maintaining a common identity for some 300,000 Burmese immigrants in the U.S. whose home country has over 54 million people divided into 135 ethnic groups speaking dozens of languages. The task is particularly tough when the Los Angeles-based Myanmar Gazette, originally founded in 2006 as the Mandalay Gazette, is the only Burmese language media in America.

In the first 10 years, the Myanmar Gazette was supported entirely by the 53-year-old KaiBwor and his wife through the income generated by their computer security service. In 2016, he went back to Myanmar and started a version of Myanmar Gazette in the capital Yangon. After a year, as costs and operational difficulties mounted, he closed the Yangon office and returned to the US.

Today, besides publishing in Los Angeles, he posts all content in pdf-format online, provides news updates on the publication’s Facebook account, and maintains a Burmese online forum the myanmargazette.net. All three digital platforms draw Burmese people from around the world as well as in Myanmar. About 5% of the Myanmar Gazette’s content is in English, targeting the new generation of Burmese Americans.

In light of the recent military coup in Myanmar this week, EMS interviewed KaiBwor for insights about the unfolding event and reactions from Burmese Americans.

Q: What happened this week in Myanmar?
TK: The military executed a coup d’etat, a recurrent tragedy in my motherland Myanmar. Aung Sang Suu Kyi, a popularly elected leader, has been deposed and detained.

Q: You have seen this before?
TK: Unfortunately many times. The Myanmar military has a history of taking over the government whenever their leadership and interests are threatened. In modern times, it happened in 1958, 1962, 1988, and now in 2021. Following each rebellion and coup, they always promised a general election within a year but never followed through. We expect the same this time.

Q: What has led to the military coup?
TK: It’s almost a mirror image of the 2020 presidential election in the US. A general election was held on November 8 in Myanmar last year and Aung Sang Suu Ki’s political party National League for Democracy (NLD) won a landslide victory. But the military, led by general Min Aung Hlaing, has claimed the election was rigged and seeked to overturn the results. The difference between the two events is whereas the US Capitol was stormed by Trump supporters, in Myanmar, the military rolled into the capital with tanks and troops and took over the Naypyidaw Parliament House, detained legislators, and arrested Ms. Suu Kyi.

Q. Did the coup catch everyone by surprise?
TK: People had suspected some military actions might happen because back in January, there were visits by high ranking military officials from Russia and China, two major supporters of the military. It’s not a surprise when China blocks the UN Security Council statement that condemns the military coup.

Q: What have been the reactions by Burmese Americans?
TK: The majority of Burmese Americans came to the US as refugees when they fled Myanmar by way of Thailand after the 1988 military coup. So they’re strongly against the current military takeover. Hundreds have been protesting at the Burmese Consulate in Los Angeles, the UN Plaza in San Francisco, and the UN Headquarters in New York.

Q: Besides Ms. Suu Kyi, are there other civilian leaders who the people also rally for leadership?
TK: This is a major political problem. People are generally supportive of Ms. Suu Kyi, who is 76 this year, but also critical of her unwillingness for grooming a new generation of leaders. There were many promising leaders coming out of the student movement in 1988 but when Ms. Suu Kyi emerged, she pushed all of them out to be the only choice for civilian leadership. To this day, there are Burmese American activists and others living outside of Myanmar who want to participate in the political and economic development in Myanmar but none has been granted visas.

Q: What would you like to see happen next?
TK: Democracies everywhere are being challenged, even here. But Burmese in America and from around the world, and the people in Myanmar can only look to the US under the Biden administration as the only hope to restore civilian leadership and promote democracy in Myanmar.