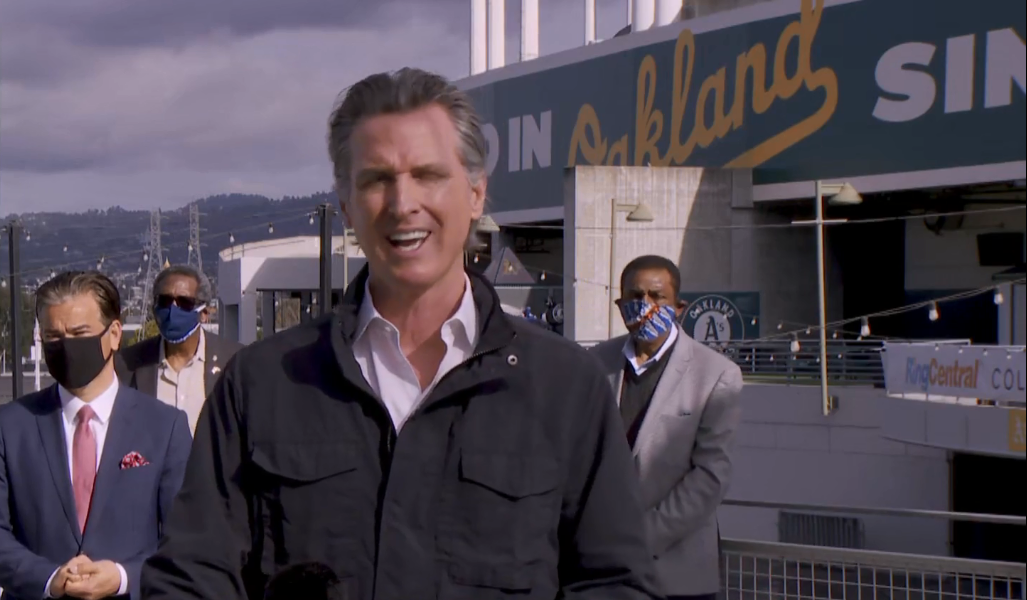 California Governor Gavin Newsom announced plans to build two mass vaccination sites in the state, one at the Oakland Coliseum and the other at California State University, Los Angeles.

California Governor Gavin Newsom and Jeff Zients, coordinator of President Joe Biden’s Covid-19 task force, separately announced a partnership Feb. 3 to build two mass vaccination sites in the state, one at the Oakland Coliseum and the other at California State University, Los Angeles.

“Equity is the call of this moment,” said Newsom, making the announcement at the Oakland Coliseum, which is the first site in the nation to partner with the federal government. “These sites were chosen to reach out to communities that are often left behind,” he said.

Zients said that both sites in California are in communities hardest hit by the pandemic. Cal State L.A is “one of the most diverse public universities in the country, serving a large Latino community,” he said.

The Eastmont and Elmhurst neighborhoods near the Oakland Coliseum, have some of the lowest health scores in the state, noted Zients. The Biden administration plans to partner with 39 states to create similar mass vaccination sites.

Newsom announced that the Oakland stadium site is scheduled to open Feb. 16. With support from FEMA, the mega site will be equipped to administer a minimum of 6,000 Covid vaccinations per day. The state plans to hire local individuals at each site, creating employment in low-income communities.

The governor noted that the two sites will not hamper existing resources, but will instead serve as additives.

Newsom noted that the state’s COVID metrics are all moving down. The positivity rate has dropped by half from 13.4 percent at the beginning of January to 6 percent. “We’re seeing the light at the end of the tunnel, but in order for our businesses and schools to reopen, we have to continue to follow safety protocols.

Hospitalizations and admissions to intensive care units have also dramatically dropped. California has moved up in the ranking of states, from its 36th spot three weeks ago, to 27 as of Feb. 2, in data released by the Centers for Disease Control. The state has been allotted more than 5.6 million doses, and has administered roughly two-thirds: over 3.5 million.

“No one is satisfied with the pace of the vaccine roll-out,” said Newsom, adding that he was looking forward to seeing the Johnson and Johnson vaccine being distributed, which only requires a single dose, unlike the Pfizer and Moderna vaccines now being deployed. The governor noted that portions of the state have already run out of vaccine, but another 1 million doses are expected this week.

A survey released Feb. 2 by the Berkeley Institute of Governmental Studies found that just 46 percent of those surveyed approve of Newsom’s performance: 48 percent said they disapprove. Just 22 percent offered a positive rating of the job Newsom and the state government are doing in overseeing the distribution of the coronavirus vaccines.

Local politicians attending the press briefing lauded Newsom’s efforts. “He is out hustling for the state every day,” said Oakland Mayor Libby Schaaf.

California State Senator Nancy Skinner, a Democrat who represents Oakland, said: “We are tired of this virus and this pandemic, but under Governor Newsom’s leadership, we have brought COVID rates down.”

“He made sure that California got the attention of the Biden administration,” she said.

David Kaval, president of the Oakland As, joined the press briefing at the Coliseum. “This is a great day. I’m looking forward to the first pitch in February, rather than in April.”