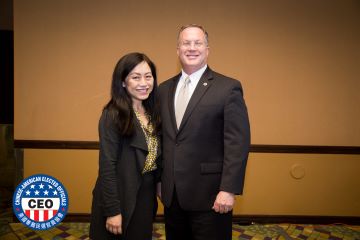 Like so many other Chinese-American women in 1986, Carol Quan was just looking for a job, any job. She had no idea that 35 years later she would be thought of as a trailblazer when she retired as a Special Assistant to the Los Angeles County Assessor.

“I was young,” Quan said recently. “I had just graduated from UCLA with studies in political science and was thinking about working in the State Department or some kind of Foreign Service. But I needed a job.” Quan’s mother mentioned that she’d heard the Los Angeles Assessor was hiring.

“They had an appraisers class so I signed up and got accepted,” Quan said. “I’ve always believed in hard-work and perseverance.”

She started in 1986 and soon proved herself to be a valuable asset to the Assessor’s Office. So much so, that it was just a little more than a decade later that she was moved into the executive branch of the Assessor’s Office as the first Chinese-American female to be named as a Special Assistant to the Los Angeles County Assessor. As such, Quan provided public service to executives as well as to the public and was a direct link to the elected Assessor on all matters, especially complicated issues.

“Carol Quan has been an outstanding employee to me and my office for the more than three decades she has worked here,” Los Angeles County Assessor Jeff Prang said. “Her positive influence on this department will be felt for years to come. She’s going to be missed.”

Along the way, Quan married and had two children, both grown now and successful, but kept a sharp eye on the job, where she became a tireless advocate for the taxpayer. Quan believes that public service is of the “highest calling.”

“I am not alone at all here in the Assessor’s Office when it comes to hard-working employees,” she said. “This office has hard-working, dependable, honest and fair employees. They always put in a good hard day’s work and don’t brag about it. They go about the business of serving the public quietly and efficiently.”

Then the COVID-19 pandemic hit with a vengeance, initially throwing everyone off stride.

“That was scary,” Quan said. “But the Assessor’s Office responded quickly and with everyone’s health and safety at the forefront.”

Quan, like so many in the Assessor’s Office and around Los Angeles County, became acutely familiar with teleworking from home. The new working arrangement coincided with a re-examination of her priorities.

Retirement began to be discussed around the dinner table and became a real possibility.

“It was nice working from home,” she said. “My mother is getting up in years and I wanted to spend more time with her. Working as long and as hard as I have, yes, it’s very rewarding, but you miss out on some family things. I didn’t want to do that anymore. It was a good time to retire.”

In January, Quan did just that. After 35 years of excellent public service to the residents of Los Angeles County, she entered a new phase of her life by retiring.

“I was so lucky to first off enjoy the work and to be of service to people who need it is so rewarding,” she said. “I’m extremely satisfied and proud of what we’ve accomplished here in the Assessor’s Office. I was able to bring awareness to the community about our many tax-savings programs, to name just one example.”

Carol summed up her most satisfying moments when she said:

“When a senior citizen that’s scared about a property tax dilemma is in tears and you can calm those fears and solve the issue. There’s nothing more satisfying. I consider myself to be very blessed to have been able in a very small way have a positive effect on members of the public.”