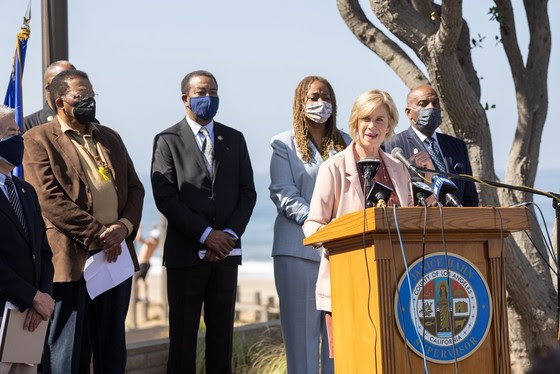 Los Angeles, CA — Today, the California State Senate passed SB 796 with unanimous bipartisan support. The legislation would remove state restrictions on Los Angeles County-owned beachfront property in Manhattan Beach once owned by Willa and Charles Bruce which limit the County’s ability to transfer the property.  SB 796’s passage would allow Hahn to move forward with her effort to return the property to the surviving descendants of Willa and Charles Bruce.

“I want to thank our State Senators who voted for this important legislation and have supported Los Angeles County’s effort to return the Bruce’s Beach property to the Bruce family nearly a century after it was stolen from them. It is my hope that once this legislation is signed into law, Los Angeles County can set an historic precedent for how we as a nation should go about beginning to atone for the sins of our past.”

SB 796 still needs to pass the State Assembly and be signed into law by Governor Newsom.  Once it is law, Supervisor Hahn will take steps at the County level to return the property to the Bruce family.

Senate Bill 796, authored by Senator Steven Bradford (D-Gardena), would specifically exclude the Bruce’s Beach area of Manhattan State Beach from public recreation and beach purpose use and would instead be sold, transferred, or encumbered upon terms and conditions determined by the Los Angeles County Board of Supervisors to be in the best interest of the county and the general public. If passed, the Director of Parks and Recreation would have until the end of the year to write up the new deed that removes Bruce’s Beach from their current restrictions.