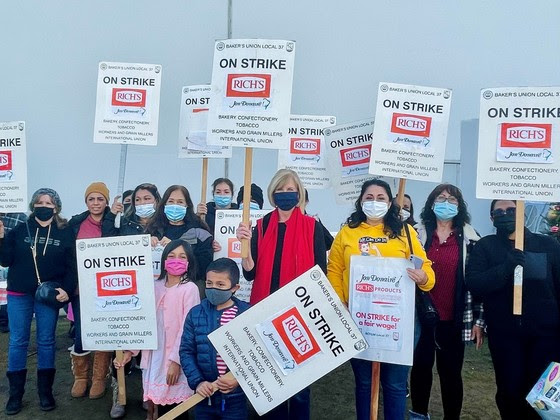 Santa Fe Springs, CA—Today, Los Angeles County Supervisor Janice Hahn led her colleagues on the Board of Supervisors showing their support for the 175 striking workers at the Jon Donaire Desserts plant in the city of Santa Fe Springs.

“I had the opportunity to join these workers on the picket line and hear their stories,” said Supervisor Janice Hahn, who represents the city of Santa Fe Springs on the Board of Supervisors. “Most of these workers are Latina women and they have been out in the cold for the past month and a half, many with their children with them, standing up for the fair wages they deserve and better treatment from their employer.  Despite the tactics the company has used against these workers, I can tell you their resolve is strong and I know this strike will last as long as it takes.”

“Coming from an immigrant working class family, I understand the sacrifices facing these workers and their families as they wake up every morning to go to the picket line and demand better pay, health care, and respect,” shared Supervisor Hilda L. Solis, First District. “As Christmas nears, I hope that these efforts by the County will help move this process along, and more importantly, let the workers know that they are not alone.”

Jon Donaire workers, most of them women, are part of the Bakery, Confectionary, Tobacco Workers and Grain Millers International Union Local 37, and have been on strike since early November. They primarily mass produce ice cream cakes that are sold at locations including Baskin Robbins, Cold Stone, Red Robbin, Walmart, and Vons. This job is labor intensive, with as many as 38 cakes per minute moving down the production line, and these workers have been routinely forced to work mandatory overtime with little to no notice.

“The LA Fed is extremely thankful to Supervisors Hahn, Solis, and the rest of the Board for declaring public support for these brave workers, the majority of whom are Latina,” said Ron Herrera, the President of LA County Federation of Labor. “These working women create the cakes that we enjoy with our families during the Holiday season, so the least that we can do is support them in their quest for better wages and working conditions.”

Through an amendment to the motion, the Board also directed the CEO of LA County to send notice to the California Labor Commissioner, California Labor & Workforce Development Agency, and the National Labor Relations Board urging them to assure the implementation of fair labor practices through the monitoring of good faith bargaining between Rich’s Products Corporation and BCTGM Local 37 in their representative capacity.