Two recent fatal attacks on Chinese in New York City allegedly by Black assailants have heightened the sense of fear and distrust within both communities, misgivings that have grown sharper amid the rise of anti-Asian hate crimes, protests against police violence and calls to defund the police.  Negative stereotypes persist on both sides of the Black American-Asian American divide. What can ethnic media reporters do to avoid perpetuating the stereotypes and humanize each other’s communities? We put this question to veteran Chinese media reporter Rong Xiaoqing, who says that to deal with the issue, you first have to acknowledge that it exists, something mainstream media coverage has tended to shy away from.

At a time of deepening polarization within our society, ethnic media are a valuable intermediary for breaking silence about racial and ethnic divides and promoting inter-ethnic communications. At a recent roundtable of Black family caregivers EMS organized with California Black Media for the California Department of Aging, one speaker suggested bringing Asian caregivers into the conversation. “We have a lot to learn from Asians about prioritizing care of elders,” she said. It’s a small but important opening into promoting a more robust cross-racial exchange at a moment when it couldn’t be more critical.

What was your reaction to the attack on the Times Square subwaay on Jan. 15 that took the life of Michelle Go?

As a Chinese person, my first reaction was to wonder, “Will I be safe on the street?” But at the same time, we have to understand that the police haven’t found any evidence to show this was a racially motivated attack. The attacker allegedly targeted other people… there was no pattern of racial motivation. But as I said, if you are standing in the shoes of Asian Americans… in the past two years, this community has seen too much suffering.

What has media coverage of the attack missed?

There’s been a lot of focus on the victim’s race, but media outlets have largely shied away from citing the alleged attacker’s race, which — if we’re going to frame this through the lens of race — is part of the story. Omitting that information does nothing to help alleviate the already existing tensions between Black and Asian communities. And even if the media doesn’t mention it, it’s all over social media. What concerns me is that media culture is so careful around race issues and so the easier thing to do is to ignore it. After the targeting of Korean shopkeepers during the Los Angeles Riots, people kept asking, “How could something like this happen? It’s such a surprise.” It’s really not.

You mentioned simmering tension between the two communities. Can you talk a bit more about that?

Last Spring there was an event in Manhattan organized by young Black and Asian activists seeking to foster greater solidarity in the wake of several high-profile incidents. I interviewed attendees, both Asians and Blacks, and I could sense a lot of misunderstanding coming from both sides. I spoke to one gentleman, a retired filmmaker in his 60s, and his remarks continue to stay with me. “You know, now we’re talking solidarity, but all I can see is Asians taking a lot of opportunities from us. They’re better off economically, they get a better education… and we’re left behind.” That voice is quite representative, I think, for a lot of people in the Black community. Among Asians, especially newer immigrants, there is a belief that they are where they are through hard work. There is little understanding of how those before them worked to create a more level playing field, so that their hard work might pay off. These tensions are real, and we all realize there is this problem. It’s like a fire, smoldering under the surface. If we don’t do anything to help these communities mend the growing gulf, it could get worse. But in order to resolve the problem, you have to be honest that there is this problem.

The attack comes as New York has welcomed a new mayor, Eric Adams, who is himself African American. Does the Chinese community see him as an ally? 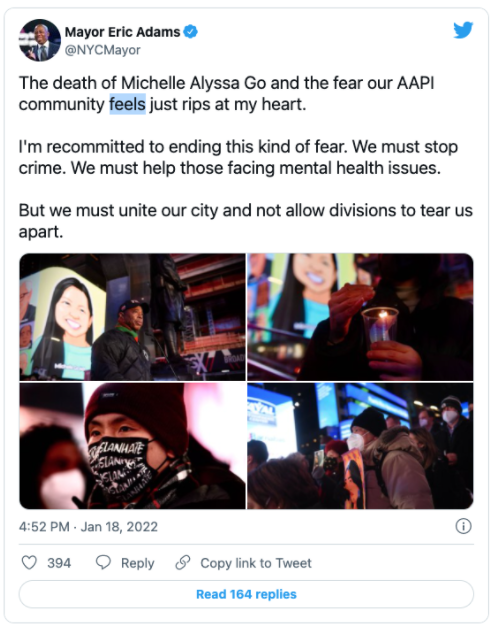 When Adams was campaigning there were a lot of Chinese who supported him. He’d been the Brooklyn Borough President for a long time and had built a relationship with the community. He was known for dressing in traditional Chinese clothes to attend Chinese events. He helped with Lunar New Year celebrations. So even before he became the Mayor he had deep roots in the community. As Mayor, he signed his first executive order aimed at helping small businesses at the Pearl River Mart in Chinatown. The community noticed that. After the Times Square attack, he tweeted a promise to improve safety in the subway, adding that the city can’t let these divisions tear us apart. Which tells me that he realizes this is a problem.

You’re critical of mainstream coverage of this incident. What has Chinese media coverage looked like?

Chinese media have been quite open about this. They’ve cited the racial backgrounds of both the victim and the alleged attacker, but they’ve also shown restraint. They haven’t looked to incite anger or vitriol. I’d say they’ve done quite well.

What could Chinese media do better when it comes to covering these issues?

I have always envisioned that when things like this happen, reporters from Black media and from Chinese media can all do stories together, and those stories would run together in our respective papers. We all have our blind spots. We tend to focus on our own communities. Our stories are told from the perspective of those in our community. It’s incredibly rare for a Chinese reporter to go into the Black community to get their perspectives, and I assume Black media is similar. I’ve never seen a reporter from the Black press come into the Chinese community to cover a story. And so, when it comes to controversial issues like this, the stories we produce remain incomplete. An endeavor like this — bringing reporters together in this way — would be tough, logistically. But it’s necessary. And if there is an urgent story that needs more of this kind of coverage, it’s this one we’re talking about now.