Los Angeles, CA (April 20th, 2022) – Congresswoman Michelle Steel responded to her opponent Jay Chen’s racist remarks in an op-ed in the Orange County Register. Chen has refused to apologize for the incident. 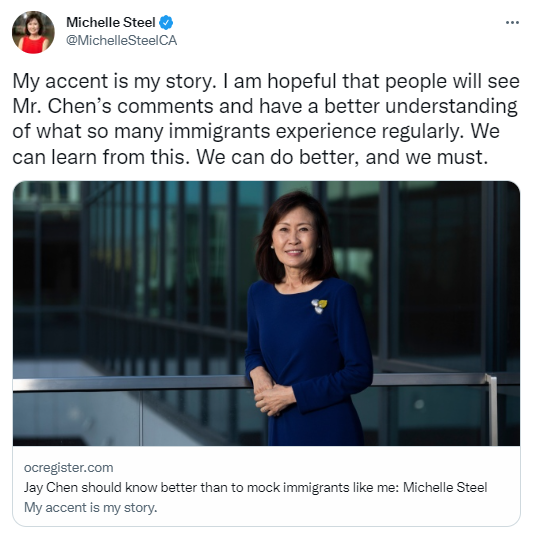 Chen has come under fire for saying, “You kind of need an interpreter to figure out exactly what she’s saying” at a campaign event. Congresswoman Steel is a first-generation immigrant to the United States who speaks three languages.

While Chen remains silent, Democrats have refused to denounce his xenophobic remarks. The Democratic Congressional Campaign Committee (DCCC) declined to express regret while Democrat Judy Chu tweeted in support of Chen in a blatant example of gaslighting.

Local and regional community leaders wrote a letter to Chen, saying, “We are calling on you to immediately and publicly apologize for your racist attacks, not just to Congresswoman Steel, but to the entire Asian American community.

“Jay Chen’s refusal to apologize for his racist remarks prove he is not serious about the concerns of Asian Pacific Americans. Voters will hold him and Democrats accountable in November.” – Said RNC Spokesman Nainoa Johsens