As the pandemic situation improves, east China’s Shanghai municipality has made efforts to balance anti-pandemic responses and economic and social development to minimize the impact of a recent surge in Omicron coronavirus cases on its economy.

On May 4, flight CZ451 of China Southern Airlines, loaded with goods, flew from Shanghai Pudong International Airport to Amsterdam, the Netherlands. It was the airline’s first flight since Shanghai had restarted the operation of cargo aircraft.

Two days later, SAIC Motor, China’s largest automaker headquartered in Shanghai, announced that the company had sold 167,000 units of automobiles since it resumed production and work in April.

On May 11, a ro-ro ship carrying 4,700 Tesla cars sailed from Shanghai toward the Port of Koper, Slovenia.

Shanghai has released two “white lists” of key foreign trade enterprises to resume work and production, covering 704 enterprises engaged in trade in goods and services, port services as well as foreign-invested enterprises headquartered in the city. The third “white list” that includes over 820 companies is expected to be issued soon.

The city began to promote the overall resumption of business and markets in stages on May 16. 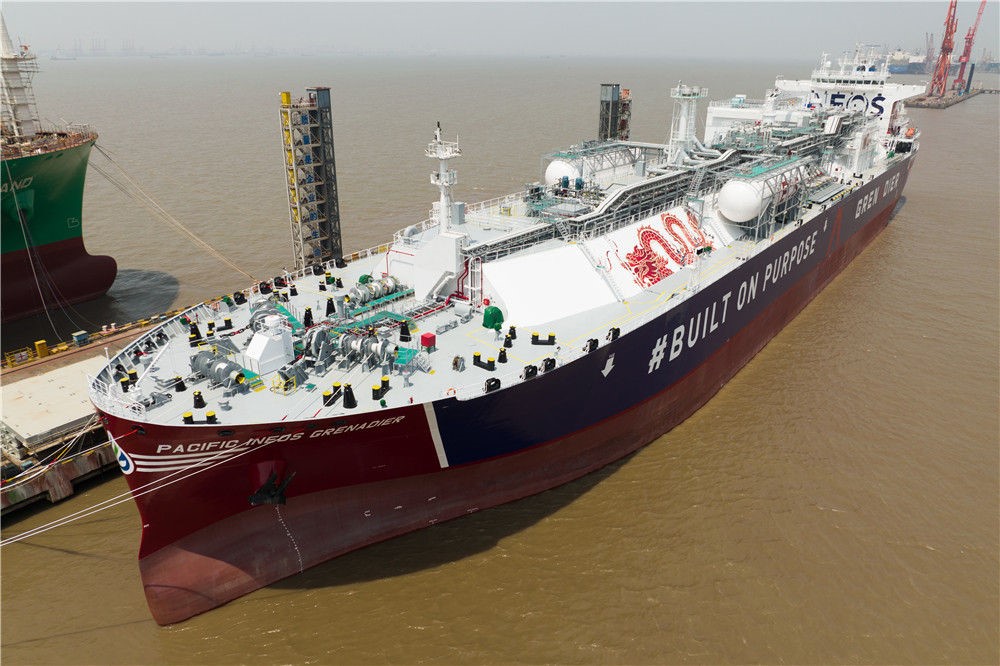 A China-made very large ethane carrier (VLEC) with the world’s largest capacity of 99,000 cubic meters, which was built by Jiangnan Shipyard (Group) Co., Ltd., is delivered in Shanghai, May 16, 2022. (Photo by Ruan Ruimin)

Guaranteeing the production of key enterprises is one of the important tasks for Shanghai to stabilize its economy.

Since the latest COVID-19 outbreak, Shanghai’s integrated circuit industry has tried all means possible to solve difficulties with supply chain, logistics and employees’ return to work.

In key enterprises of the industry represented by Huahong Group, SMIC, and GTA Semiconductor, more than 15,000 employees have stuck to closed-loop production, helping maintain the industry’s capacity utilization rate at over 90 percent.

Since it started the pressure test for resumption of work and production in April, SAIC Motor has seen 40,000 employees from its subsidiaries in Shanghai take part in closed-loop production and operations.

Shanghai is home to clusters of high-end manufacturing industries including integrated circuits, large passenger aircraft, new energy vehicles, artificial intelligence (AI) and biomedicine, and is a major link of international and domestic industrial and supply chains.

To ensure the sustaining operations in key industries, Shanghai has released “white lists” of key foreign industrial enterprises to restart work and production since April 16, and issued guidelines on epidemic prevention and control.

Over 90 percent of workers have returned to their positions at a factory of Contemporary Amperex Technology Co., Ltd, (CATL) located in Lingang Special Area of China (Shanghai) Pilot Free Trade Zone. The producer of power batteries has brought its production capacity back to the pre-outbreak level, which has not only supported electric vehicle manufacturers in resuming work and production, but driven gradual production resumption of many suppliers.

Shanghai has made it a major task to ensure smooth transportation of goods.

Due to the COVID-19 outbreaks in various regions of China, land transport has been faced with obstacles. To effectively utilize the Port of Shanghai, an international hub port, Shanghai International Port Group has exploited the overall advantages of the port and optimized the ways of handling containers to ensure timely arrival and shipment of containers.

Besides, it has promptly rolled out a service to shift land transport to water transportation, which has covered the Yangshan Port, Waigaoqiao Port, and ports in the Yangtze River Delta and basin, to accelerate the expansion of waterway business channels.

Wharves of the Yangshan Port, Shanghai, maintained relatively stable operations amid the latest outbreak. The port’s average daily container throughput in March and April stood at 66,000 and 59,000 twenty-foot equivalent units (TEUs), respectively, 90 percent and 85 percent of the average during the first quarter, according to a report released by Shanghai’s Yangshan Special Comprehensive Bonded Zone on May 9.

As international and domestic trade transactions improve, warehouses at the Yangshan Special Comprehensive Bonded Zone become busy. A total of 193, or 85 percent of the companies operating at the special comprehensive bonded zone have restarted operations.

Ding Yunwei, a director of operations at the Asia-Pacific distribution center of Mettler Toledo, a global provider of precision instruments and services for professional use, said that in April, the sales of the distribution center, which has implemented closed-loop management, reached 80 percent of that in the same period last year.

Foreign investors are still confident about expanding their businesses in Shanghai. On May 3, United Overseas Bank (China) announced that it would open a branch in Lingang Special Area in the third quarter of this year, becoming the first foreign-funded bank to operate in the area.

L’Oréal announced on May 8 the decision to set up its first investment company in the Chinese market in Fengxian district, Shanghai, which was also the first investment project signed by a Fortune Global 500 multinational during the resumption of work and production in Shanghai.