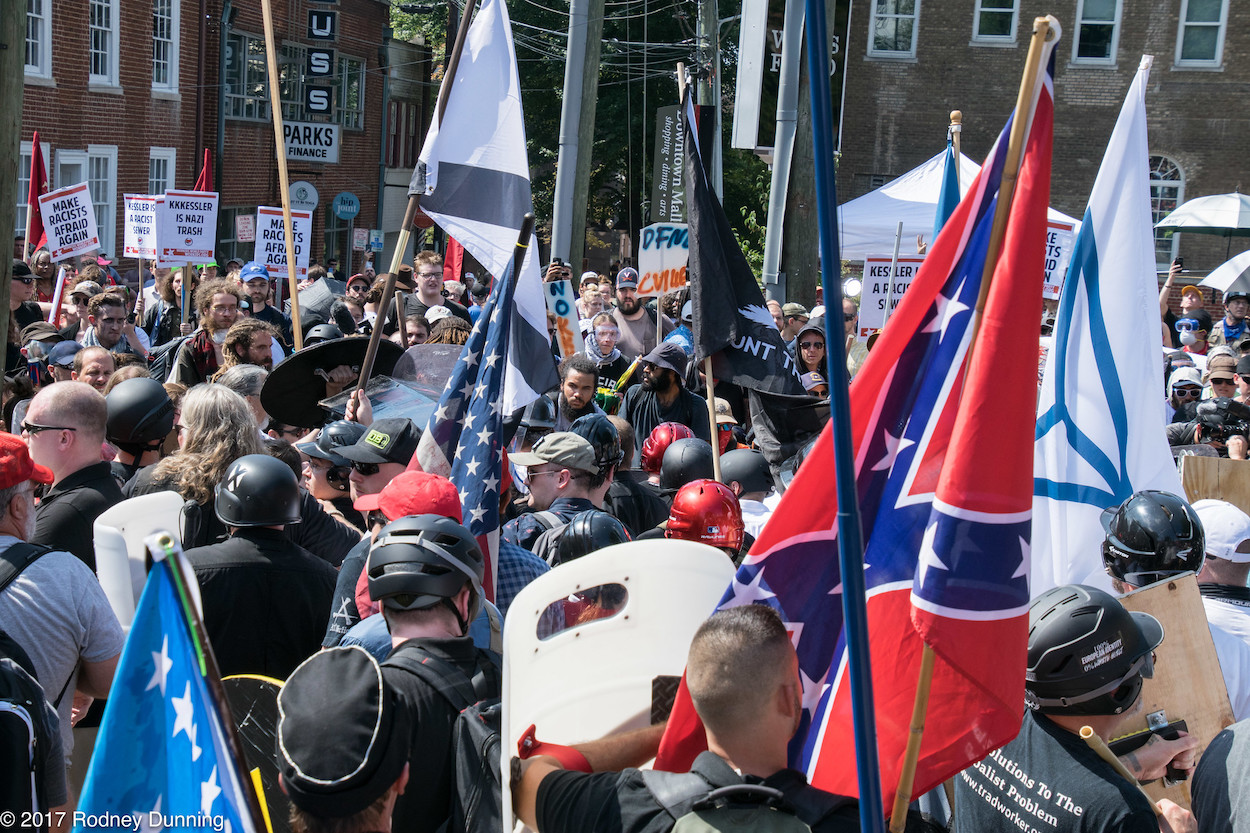 (Image: Far-right and white supremacists groups clash with counterprotestors at the Unite the Right rally in Charlottesville, Virginia in 2017. Image via Flickr)

Law enforcement knows that the top threat of deadly violence in the United States today comes not from “tree huggers” or Black Lives Matter activists, but from white supremacists and far-right extremists.

But in the eyes of the law, they’re all treated the same.

This was among the messages presented Tuesday to the U.S. Senate Judiciary Committee hearing on “‘Metasticizing’ Domestic Terrorism.”

To “metasticize” is to dangerously spread and grow, like a cancer.

The hearing was held in response to the May 14 attack at a Buffalo, N.Y., grocery store that killed 10 shoppers and store security, mostly black.

Among those testifying was Michael German, a 16-year veteran of the FBI who cut his teeth working undercover, infiltrating white supremacist and right-wing militant groups in Los Angeles and Seattle in the ‘90s before resigning in protest over what he deemed misguided agency policies around counterterrorism in the post-9/11 era.

He now works at the Brennan Center for Justice, after publishing a book and working for the ACLU.

A first step law enforcement should take, he said, is simply to focus on who’s most violent.

“Congress has already done the work necessary to provide federal law enforcement with all the tools it needs,” he said.

“The FBI and Justice Department use their domestic terrorism authorities most aggressively against groups that are far less violent and rarely, if ever, commit fatal attacks, such as environmentalists, animal rights activists, peace activists, anti-racism activists, anti-fascists and, most recently revealed, Concerned Women of America,” he testified.

But, “white supremacists are the most violent and deadly among the perpetrators the FBI categorizes as domestic terrorists,” he said — and the most deadly to law enforcement officers themselves.

“The problem is that the Justice Department and FBI choose not to prioritize the investigation and prosecution of white supremacist and far-right violence as a matter of policy and practice.”

Also, German noted, data on both the extent of white supremacist crimes and on how it’s being addressed are lacking.

Too often, German said, violent crimes are left to state and local authorities or other agencies such as the Bureau of Alcohol, Tobacco and Firearms or the Drug Enforcement Agency to prosecute, according to their varied rules and appetite for justice.

For example, German said, a murder that could be considered domestic terrorism might be prosecuted instead as a hate crime, or simply a violent crime, and referred to state and local authorities, some of whom don’t have hate crime laws.

Of the 230,000 hate crimes that occur on average per year, only 25 are prosecuted at the federal level, German said, while only 14% of police agencies even acknowledge that hate crime exists within their jurisdictions.

“At some point we must acknowledge that white supremacy is not an ‘extremist’ belief system, but instead far too mainstream,” German testified.

But when leaders adopt these positions, German said, people understand them as authorization to act on those beliefs — which have also, alarmingly, taken root in law enforcement circles.

Like the killer of 23 people in El Paso, Texas in 2019, the 2018 synagogue attack in Pittsburgh that killed 11 and the Christchurch, New Zealand, killing of 50, the Buffalo gunman   justified his murderous targeting of black shoppers with the “Great Replacement Theory” that has cropped up repeatedly around the world in blaming an “other” — usually a racial or ethnic minority or religion, often immigrant — for usurping power and opportunity from a more privileged sector of the populace.

In 2022, such beliefs have been accepted by nearly a third of U.S. respondents — and 54% of Fox viewers, according to polling that German cited.

It’s not surprising, he commented. “Politicians and media pundits have long exploited racial resentments and public fears of demographic change to sway voters and build an audience.”

And too often, he continued, violent actors are portrayed and prosecuted as “lone wolves” without broader consideration of their fellow travelers.

This was the case with the Buffalo, N.Y., attacker, but closer examination turned up not only advance warnings of the scheme posted and seen online, but also that he described his plans openly to others, including at least one federal agent, and had help in choosing his weaponry.

When he was working undercover with white supremacists, German testified, “lone wolf tactics” were recommended by its leaders for those “committing criminal acts, as part of a broader ‘leaderless resistance’ strategy” to keep the group as a whole out of trouble.

Ever since 9/11, German said, too much emphasis has been placed on surveillance for terrorist recruiting and radicalization efforts — to little effect beyond the detriment of people’s privacy — and “see something, say something” campaigns that have been similarly ineffective and divisive.

More effective strategies, he testified, would be to focus on how the violent element operates within the white supremacist movement, focusing on the tactics used, and amassing data and successfully prosecuting all violent crime across the board.

German is the author of the 2008 book, “Thinking Like a Terrorist: Insights of a Former FBI Undercover Agent” and his reports on white supremacist groups and far-right militancy can be accessed online: “Fighting Far-Right Violence and Hate Crimes,” (2019), “Hidden in Plain Sight: Racism, White Supremacy and Far-Right Militancy in Law Enforcement,” (2020) and “How to Combat White Supremacist Violence? Avoid Flawed Post-9/11 Tactics” (2020).