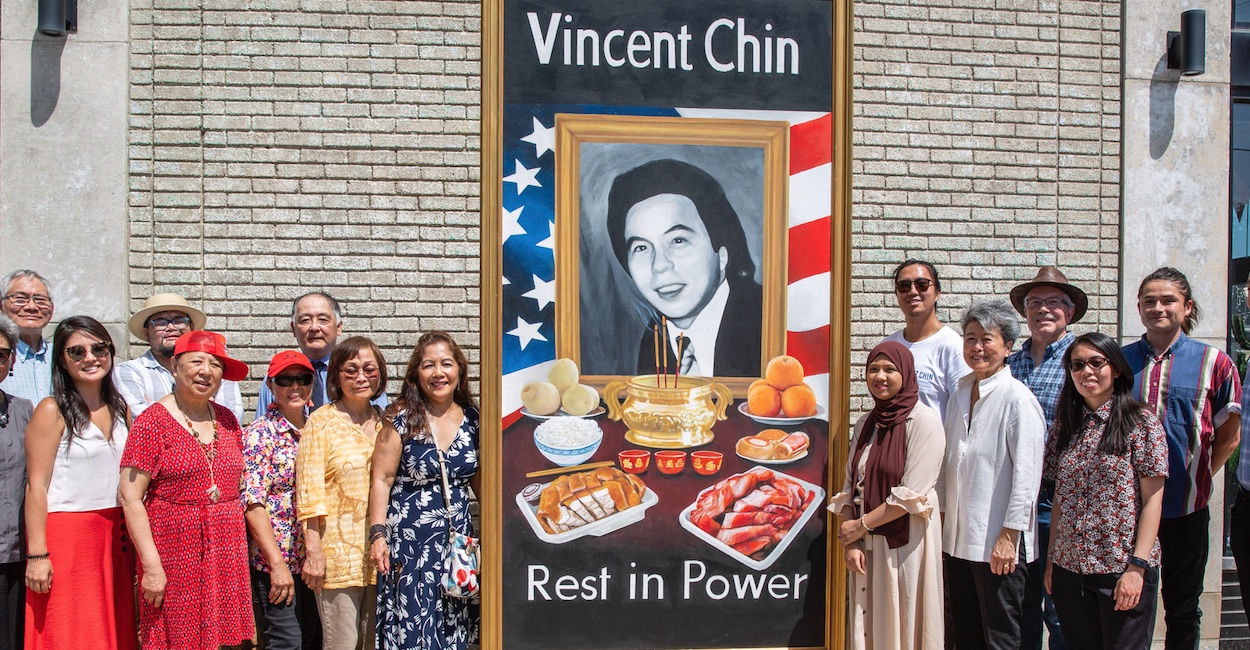 Image: Asian American civil rights leaders gathered around a mural of Vincent Chin, which will be displayed in Detroit’s Chinatown. (Joyce Xi photography)

Asian American leaders from across the US held a four-day commemoration in Detroit, Michigan, June 16-19 to honor the legacy of Vincent Chin, an autoworker who was beaten to death with a baseball bat on June 23, 1982  by two white men, on the night of his bachelor party.

“It is really exciting and moving to see this momentum,” said Helen Zia, who in 1983 co-founded American Citizens for Justice with Jim Shimoura, and Roland Hwang. “We come together to celebrate the pan-Asian movement that Vincent Chin inspired, and our solidarity with other communities.”

“We are mindful of how much we must do to ensure a safe world for everyone,” said Hwang. “We remember Vincent Chin. We rejoice the ongoing civil rights movement sparked by his death.”

At a press conference June 15, a commemorative mural of Chin was unveiled. Created by the artist Anthony Lee, the mural will be displayed in Detroit’s historic Chinatown area.

Lee said he was proud to honor the legacy of Chin, whose murder predated hate crime laws. “Wherever there is art, there is dignity. This is a good step in the right direction towards justice,” he said. The mural bears a sketch of Chin, with the traditional offerings of incense, rice, fruit, tea, and food. The imagery is framed by the American flag.

Zia unveiled a 64-page legacy guide and teaching tool which will be distributed to every middle and high school in the Detroit area. The guide is also available online, without charge, and will be translated into several Asian languages.

Zia presented the very first copy of the guide to Dr. Suchiraphon McKeithen-Polish, a bilingual education program director for the Macomb Intermediate School District. “This is an important tool to learn about the Asian American civil rights movement,” said Zia.

“I had just graduated from high school in 1982 when I learned what happened to Vincent Chin,” said McKeithen-Polish. “Thank you on behalf of all educators. The legacy guide will be an important tool in acknowledging that anti Asian hate and discrimination still exist.”

The four-day commemoration kicked off June 16 with the first-ever convening of the Midwest Asian American Documentary Filmmakers. The event brought together key artists, Asian American documentary filmmakers, and experts in the field to discuss strategic collaborations and opportunities for filmmaking, and continued the following day.

On June 16 night, director David Siev was on hand for a discussion about his 2022 film, “Bad Axe,” a portrait of an Asian American family in President Donald Trump’s rural America, who struggle to keep their American dream alive even as they face  a pandemic, Neo-Nazis, and generational scars from the Cambodian Killing Fields.

On June 17 night, the commemoration featured a screening of the seminal film, “Who Killed Vincent Chin?” The 1987 film, which was nominated for an Oscar, featured footage of an interview with one of Chin’s attackers, Robert Ebens. Director Renee Tajima-Peña, Associate Producer Nancy Tong, and Executive Producer Juanita Anderson participated in a question and answer session, moderated by Donald Young, Director of Programs at the Center for Asian American Media. PBS screened the film on June 20 evening, during its show POV.

June 18 featured a national conversation about the role of Asian Americans in democracy, and the struggle for racial justice. Later that evening, Asian American performers presented two hours of dance, music, and poetry.

The final day of the commemoration featured an interfaith remembrance ceremony honoring Chin and his family, followed by a discussion on the history of the Asian American civil rights movement and its future.

In a particularly poignant moment, family and friends of Chin walked to his gravesite at the Forest Lawn Cemetery in Detroit.

Chin’s attackers — Ebens and his stepson Michael Nitz, fellow workers at the Chrysler auto plant in Detroit — attacked Chin in the mistaken belief that he was Japanese. They blamed Chin for the auto factory jobs in the U.S. which were allegedly being lost because of a ramp-up of production by Japanese manufacturers.

The perpetrators were allowed to enter pleas on the charge of manslaughter. Ebens pleaded guilty, while Nitz pleaded no contest: they were let off with an insignificant fine and spent no time in jail. A federal court stepped in and found Ebens guilty of second degree murder, which carries a sentence of 25 years. However, the verdict was over-turned.

The Asian American community has experienced a fresh wave of hate crimes over the past three years. The web portal Stop AAPI Hate, which allows a victim to self report in one of several Asian languages, has recorded 10,905 hate incidents from March 19, 2020 to Dec. 31, 2021. The incidents include verbal harassment, physical assault, being coughed on or spat upon, bullying, and civil rights violations. Almost half of the incidents have been in public spaces, such as streets, parks, or public transit.

Older Asian American adults have been targets of some of the most visible physical assaults.

The Vincent Chin 40th Remembrance and Re-dedication Committee partnered with the Kresge Foundation to create the commemoration. Sam Kiyomi Turner, an associate program officer with the Kresge Foundation, said at a June 15 press briefing: “Our hope is that this dedication will serve as a container for all the leaders who are committed to equity and justice, and dismantling systemic racism.”

David Han, Commissioner of the Michigan Asian Pacific American Affairs Commission, noted: “In today’s hyper-racialized environment, this dedication jolts us awake to the fact that freedom, justice, and opportunity for all cannot be taken for granted. We are in the margins, but that does not to be our lot. Changes happen in the margins.”