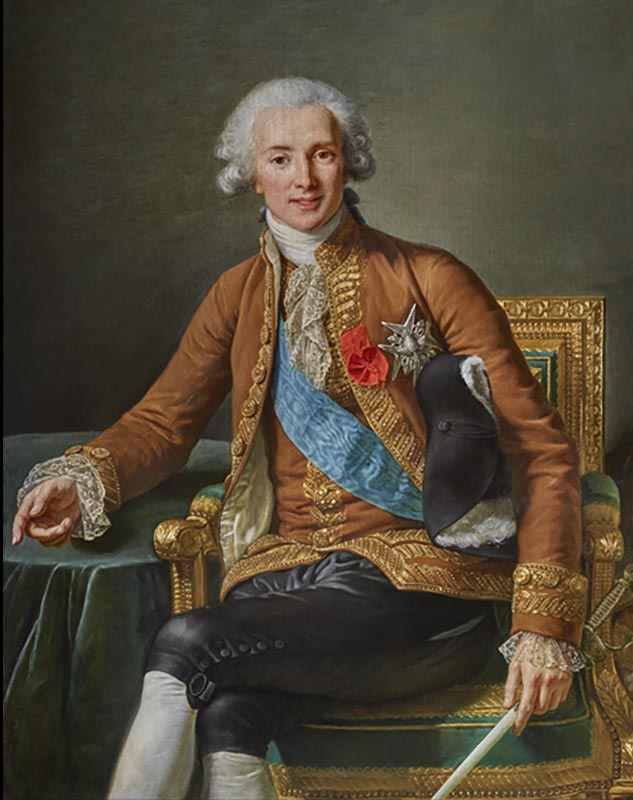 SAN MARINO, Calif. (Nov. 1, 2022)—The Huntington Library, Art Museum, and Botanical Gardens has acquired a major painting by Élisabeth Louise Vigée Le Brun (1755–1842), the most important female artist of 18th-century France. Portrait of Joseph Hyacinthe François-de-Paule de Rigaud, comte de Vaudreuil (ca. 1784) is the second masterpiece to come to The Huntington through a gift from The Ahmanson Foundation.

“We are enormously grateful to The Ahmanson Foundation for making this acquisition possible,” Huntington President Karen R. Lawrence said. “Adding an important work by Vigée Le Brun helps us achieve one of our goals—adding more works by important women. Once again, The Ahmanson Foundation proves to be an invaluable strategic partner, allowing us to make a masterpiece accessible to Southern California audiences.”

The Vigée Le Brun painting complements The Huntington’s significant collection of 18th-century French decorative art, which was established by Henry E. and Arabella Huntington in the early 20th century. “This finely painted masterwork will go on display in the Huntington Art Gallery, the building that holds French tapestries and carpets that were once part of the French court’s accoutrements at the Palais du Louvre and Versailles,” said Christina Nielsen, the Hannah and Russel Kully Director of the Art Museum at The Huntington. “It will not only add rich context, but will also shine as a star French painting. While our collection of 18th-century British portraiture is one of the best in the nation, this is our first French portrait of this caliber.”

The painting also has an interesting history. The painter and the subject were both part of the inner circle in the royal court, and they both greatly shaped Parisian salon culture. Their friendship has been celebrated by contemporary writers in poems and verse.

Vigée Le Brun was the daughter of a portraitist and was painting professionally by the time she was in her teens. When she was 28, she was inducted into the French Royal Academy, with the support of Marie Antoinette, and she was one of only four female members. Vaudreuil (1740–1817) was an actor, socialite, and Vigée Le Brun’s primary private patron. In her memoir Souvenirs, Vigée Le Brun reveals her affection for him, calling him “l’Enchanteur” (The Magician).

Painted to commemorate the day when Vaudreuil was made Knight of the Order of the Holy Spirit by King Louis XVI, the seated portrait shows off the sitter as well as the artist’s virtuosity. Vaudreuil is dressed in an ornate brown coat with gold braids, trim, and beads and white silk lining. He wears a sheer lace jabot and cuffs. His shimmering blue sash and the silver badge on his coat represent the knightly Order of the Holy Spirit. The red silk rosette and ribbon are of the royal military order of Saint Louis, which he received from King Louis XVI in 1770. He clasps a fashionable tricorn hat with white plumes under one arm and holds the handle of a ceremonial sword.

Vaudreuil was the son of the governor and commander-general of the French colony Saint-Domingue on the Caribbean island of Hispaniola. In addition to a great inheritance, Vaudreuil’s wealth also derived from his own Saint-Domingue sugar plantations, which were powered by enslaved people. “As with our recently acquired drawings of the Jamaican sugar plantation where the famous ‘Pinkie,’ from our British portraits collection, grew up, the Vaudreuil portrait provides us with an opportunity to shine a brighter light on the history of European colonization,” Nielsen said. “We must, and will, reckon with the lives of the people represented on our walls.”

The painting is slated to be installed in the Huntington Art Gallery in November.