LAPost/Los Angeles, Ca (November 06, 2022) – The “Whispers of Trees” soundscape concert, born out of the National Kaohsiung Center for the Arts (Weiwuying) “Kaohsiung Powerful” performance creative project, made its first trip to the west United States under the promotion of the Ministry of Culture and the Taiwan Academy of the Los Angeles Office, after performing in Seattle and the Huntington Library in Los Angeles, the final show of the tour on November 6 at the James R. Armstrong Theatre at Torrance Cultural Arts Center in Southern California, young composer Hsuan-hung Chou and young video director Zhao-yi Wei had a direct dialogue with the audience after the performance to exchange creative ideas and creative process. City of Torrance Taiwanese Mayor George Chen and his wife watched the performance that day. 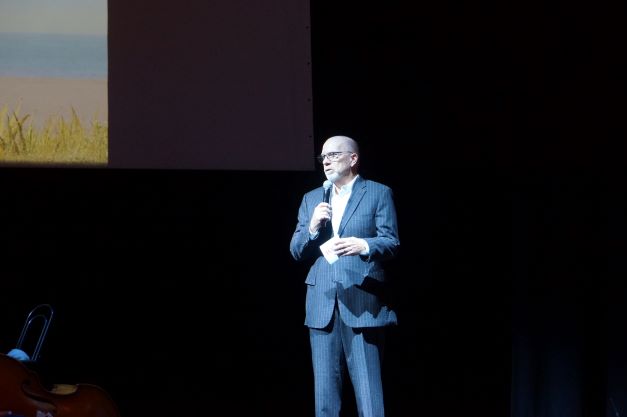 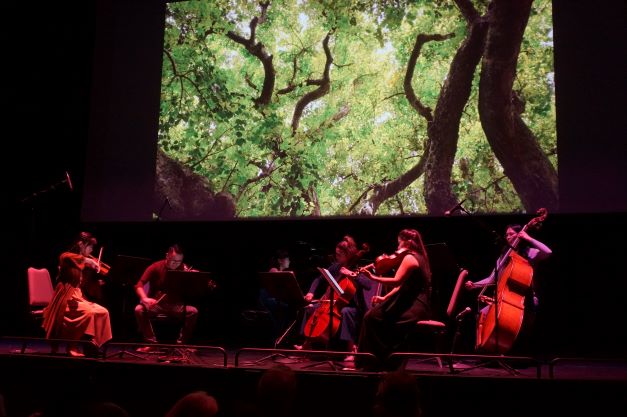 The “Whispers of Trees” soundscape concert, co-created by young composer Hsuan-hung Chou and young video director Zhao-yi Wei, takes “trees” as the core, and is paired with Kaohsiung for recording, video, soundscape and music ‘s creation, highlighting the symbiotic relationship between human beings and nature. The two young creators said that the work looks at the appearance of trees in the scope of human activities from the perspective of trees, and observes the state of human beings in reverse. Through the guidance of images and music, looking at the swaying tree shadows, listening to music and those often overlooked soundscapes, in addition to bringing out the imprints around life, from the rhythm of daily life, into the extraordinary sensory experience, such as Like daydreaming under a tree, it enters another state of mixed reality and reality, and triggers thinking about the interaction between human’s own environment and natural objects. 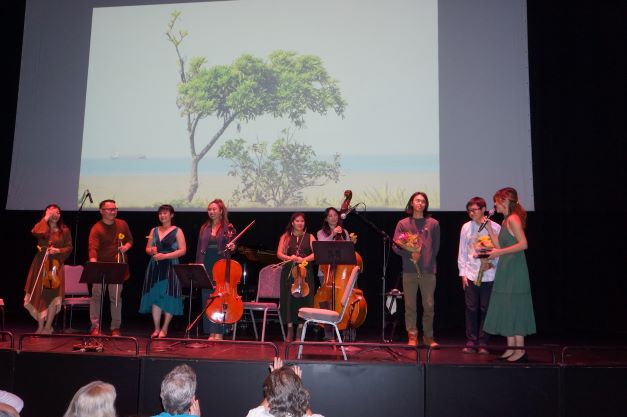 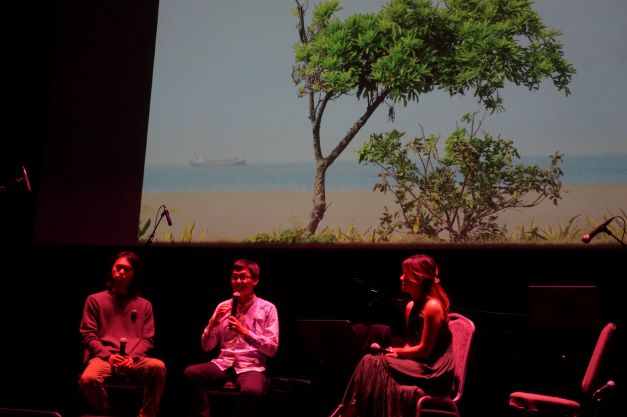 Kathleen Lee (right), a young designer living in the United States, presided over the interview of the two young artists after the performance and the interaction with the audience 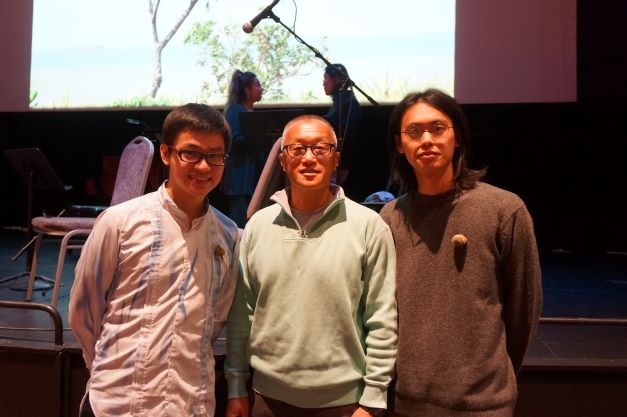 Young composer Hsuan-hung Chou graduated from New York University with a master’s degree in Film and Multimedia Score. He is currently the composer-in-residence of the Kaohsiung City Wind Orchestra and the artistic director of the Six Arts Music Collection; video director Zhao-yi Wei’s works focus on the development of “relationship”. From the interaction between people, things, places, and the environment, explore the social relationships that cross borders, cross groups, and cross species. 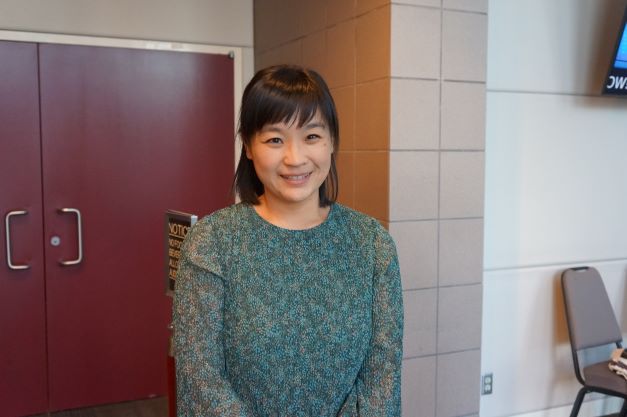 Li-Cheng Hung, Ph.D. in Musical Arts from the University of Washington, Seattle, pianist and artistic director of the Seattle Opera House, and Taiwan-based pianist Li-Cheng Hung performed three performances in Seattle and Los Angeles. Musician in Los Angeles) performed this work perfectly with Hong Lizhen in a short period of time.

In an exclusive interview after the performance, Li-Cheng Hung said, “This is a brand-new creative work, and there is no performance example to follow. You need to give full play to your imagination and live emotions to play this work. Although the composer is very Young, but the works make me feel like returning to the days of my grandparents. They are full of metaphors and leave a lot of space for the audience to imagine. They can bring their thoughts into the appreciation process. After meeting these two young artists And after knowing the story behind the work, I have more imagination for this work.” 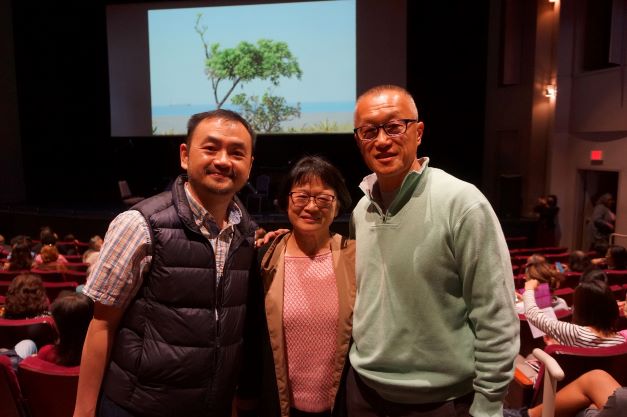 The Taiwanese mayor George Chen and his wife, where the theater is located, invited friends to watch the performance that day. He said: This is the first time in our city to hear music from Taiwan, which is very rare. We welcome more performances from Taiwan in the future.

Te-Yuan Chien, Director of The Taiwan Academy of the Taipei Economic and Cultural Office in Los Angeles mentions that The concert brings together outstanding young Taiwanese artists from Taiwan and the United States to perform together. It is an honor to introduce this production that highlights the symbiotic relationship between human beings and nature. At the same time, it introduces the Weiwuying National Art and Cultural Center to the audience in the United States and Western America, a beautiful image created with the image of a banyan tree. Theater, let the audience have a daydream under the tree with the music. The academy in the way of identity recognition beyond national borders introduces Taiwanese culture to local friends. 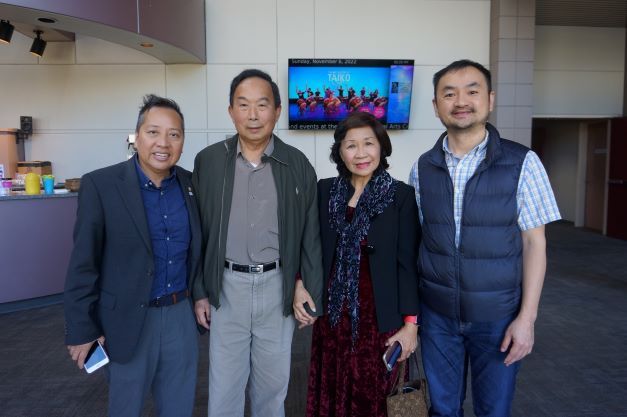 Teresa M.S. Lee, Commissioner of Overseas Taiwanese Affairs of Taiwan Hakka who lived in the United States, exclaimed excitedly after the performance: “Excellent Taiwanese youth are very moving! This performance is not only a concert, but also a visual feast, so the tree is thriving, Endless life, creating rhythms in beautiful music and real-time videos of various tree landscapes, bird sounds and insect sounds in southern Taiwan, let the wandering overseas wanderers miss their hometown more in “Whispers of Trees”, and bless the old Taiwan Tomorrow will be better. I hope that more talented Taiwanese youths will perform overseas to promote Taiwan’s value and let the world see Taiwan. 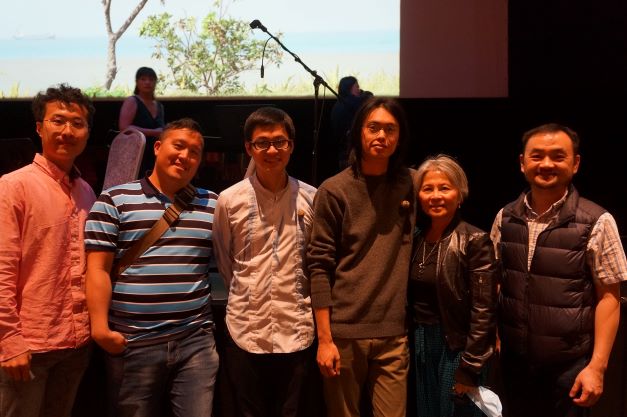 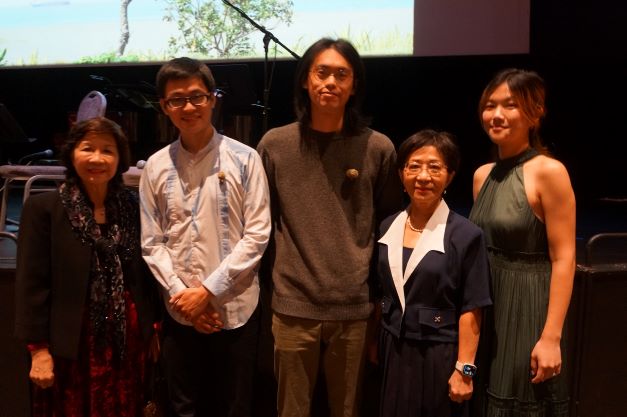 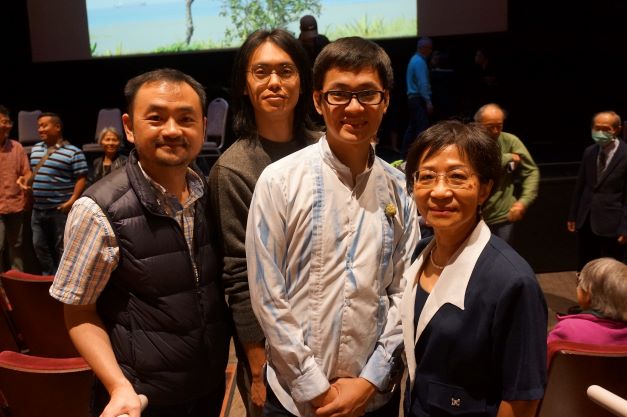 The performance that day attracted overseas Chinese from San Diego, Laguna Beach and Temple City, including a family of five from San Diego, who drove for more than two hours one-way that day to watch the performance live. April Lin, the principal of the Taiwan School of the Taiwan Guild Hall in Greater Los Angeles, also came to the scene from Temple City to cheer on the outstanding young artists from his hometown. 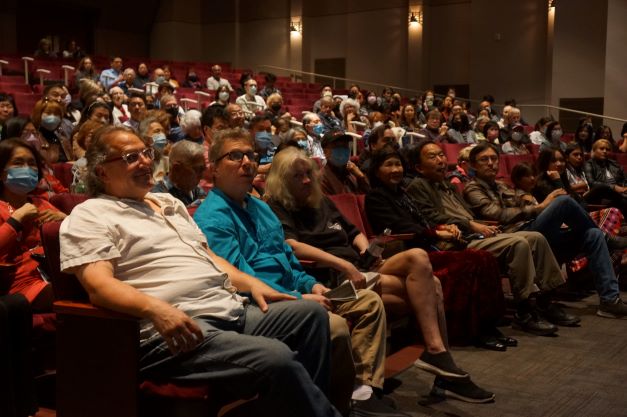 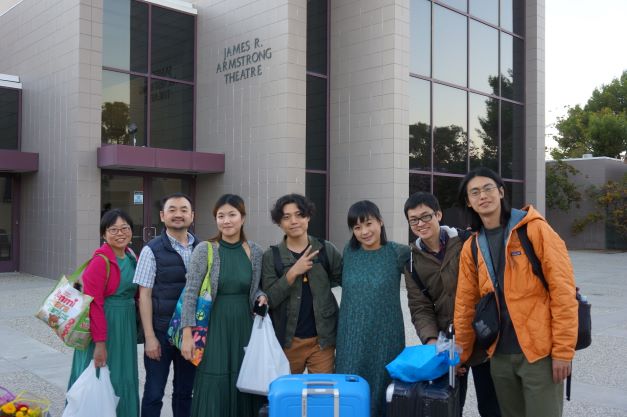 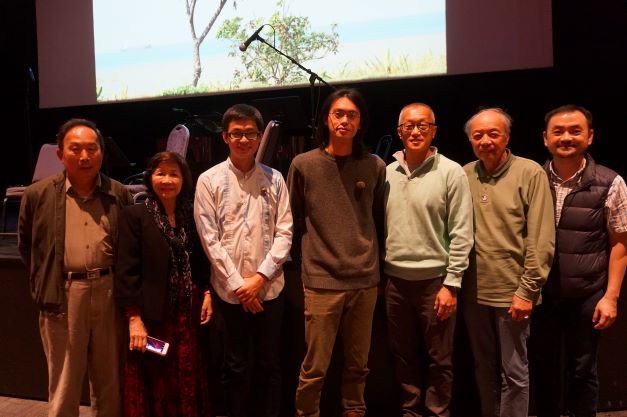