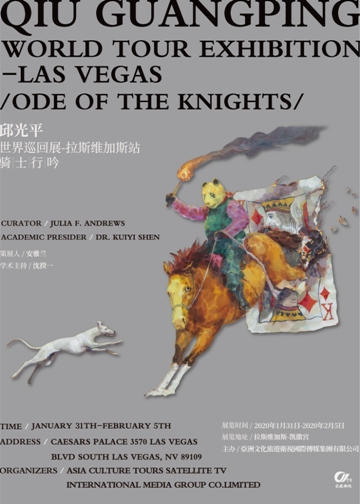 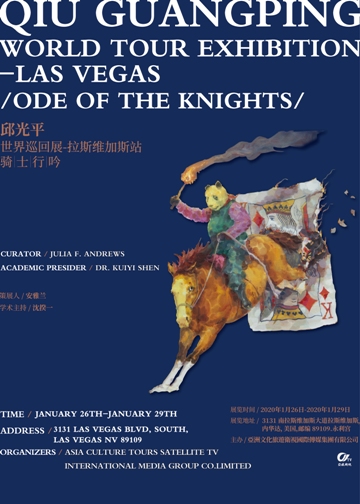 The famous Chinese artist Qiu Guangping’s large-scale solo exhibition “Ode of The Knights” will land on Wynn and Cesar Palace in Las Vegas, USA on January 26, 2020, and will start the first stop of the Qiu Guangping World Tour Exhibition It is also the first exhibition of Chinese artists ushered in by two internationally renowned high-end hotel chains. In this exhibition, Professor Julia F. Andrews, a famous American art historian, is invited as the curator, and Mr. Shen YiKui, the director of the China Research Center of the University of California, San Diego, is the academic chair.

Qiu Guangping was born in Sichuan and is currently a professor at the Jincheng College of Sichuan University. He is a leading representative of Chinese contemporary young oil painters. His works have a very bright performance in the Chinese and international art markets, and are sought after by high-end collectors and investors. Qiu Guangping’s artistic creation was full of the mysticism of Orientalism and the wild imagination from the beginning. His exaggerated yellow grin horse has become his iconic visual symbol, which is well known in the contemporary Chinese art world. Subsequent “Paradise Series” works pushed Qiu Guangping’s humanistic care to a higher level. The compassionate heroism revealed in his works and the ultimate inquiry into human destiny became his works. The new connotation, and bold attempts in sculpture, installation, documentary filming, behavior, etc., have fully demonstrated his outstanding performance and control in each large-scale solo exhibition, each appearance will attract the public’s Strongly concerned.

Qiu Guangping’s art is measured and experienced with his physical body. He looks like all kinds of elves in his works, more like a lone ranger, Dongfang Don Quixote. Every time he travels, he is looking for a truth.

This exhibition has been prepared for nearly a year, and has received the strong support and help of many business people at home and abroad, Chinese and overseas Chinese, as well as the widespread attention of important media at home and abroad. Qiu Guangping’s large-scale solo exhibition “Knight’s Walk” is hosted by Wynn, Caesar’s Palace, Asia Cultural Television International Media Group, the All America Chinese Youth Federation, and the Chinese American Institute for Public Diplomacy, LAPOST. This exhibition continues until February 5, 2020, and will be successively exhibited in Doha, Qatar, Hong Kong, Macau, Tokyo, Japan and other cities. (AACYF Los Angeles)