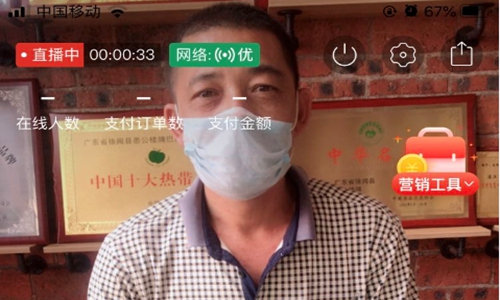 For farmers, whose businesses are traditionally highly dependent on venues such as wholesale markets and shops with the hustling flow of customers, the ongoing closure of such gathering venues to reduce the risk of human-to-human transmission means their work resumption is not easy, thus affecting their income, which will further dampen the local poverty alleviation goals.

Farmers across the nation have spared no effort to overcome these unavoidable challenges, and livestreaming sales have emerged as one of their unique business models.

Traditionally, most agricultural products in China were sold through wholesalers. The products harvested by farmers and rural cooperatives would be collected by the wholesalers, before entering peddlers’ and wholesale markets. Thereafter, it will be channeled to the wet markets and supermarkets, and finally, land on consumers’ baskets. However, following the transportation and road blockades, such a long sales chain stands snapped.

The family of Wang Linfen from Chengmai county in South China’s Hainan Province has been growing sweet potatoes for generations. Most of the farmers in her town make a living by growing the vegetable.

In the past, the typical vegetable with good taste and rich in nutrition always generated sufficient sales. Speaking to the Global Times Wang said, the offline sales volume of the vegetables harvested in December could reach 200 tons per day during the past Spring Festivals. However, only a bit more than 300 kilograms were the best sales on a single day this year due to the closure of the wholesale market, the most important part of the traditional circulation.

According to Wang, her family owns a piece of land with an area of over 40 mu (2.67 hectares). Each mu can usually harvest about 2,000 kilograms of sweet potatoes. About 75 percent of sweet potatoes grown by her family in the past were collected by wholesalers from across the country, and the rest 25 percent were sold online.

“Wholesalers have various sales channels that can help sale in big batches, so most of our sales rely on the wholesale markets, as the sales generated online targeting individual customers cannot match,” Wang said.

But so far this year, almost all her income came from online sales. Wang opened her online shops at e-commerce platforms such as Pinduoduo and Taobao three years ago. Since the offline sales channels faced obstacles, she put more effort into online sales and started live streaming relentlessly.

At present, she spends at least two or three hours daily to promote her sweet potatoes through livestream every afternoon. During a livestreaming session held between February 10 and 12, she sold about 8.6 tons of sweet potatoes.

“Compared with simply selling products through online shops, the effect of livestreaming is better, since the customers can see the products with their eyes,” said Wang noting as online sales and live streaming is the current trend, she wants to put greater focus on this aspect even after the epidemic ends.

While some farmers are striving to recover their economic losses through livestreaming, others discovered new opportunities through this alternative revenue model.

“Compared with wholesale markets, promoting the sales of fruits through livestreaming allows the customers to see the real condition of the place of production, the quality of the products, and interact with the farmers directly, which further expand influence and promote brand awareness of the local pineapples,” Weng Zhiquan, an e-commerce practitioner involved in the trade, bid data and industry of pineapples from Xuwen county in Zhanjiang, South China’s Guangdong Province, told the Global Times.

Xuwen is one of the nation’s largest pineapple production zones. According to Weng, around 48,000 farmers in his county cultivate about 350,000 mu areas for pineapples with annual production reaching 600,000 tons.

According to Weng, although local farmers have been selling their products through e-commerce platforms for years, online sales have been growing particularly fast this year due to the epidemic. At present, the online sales volume exceeded the revenue garnered offline.