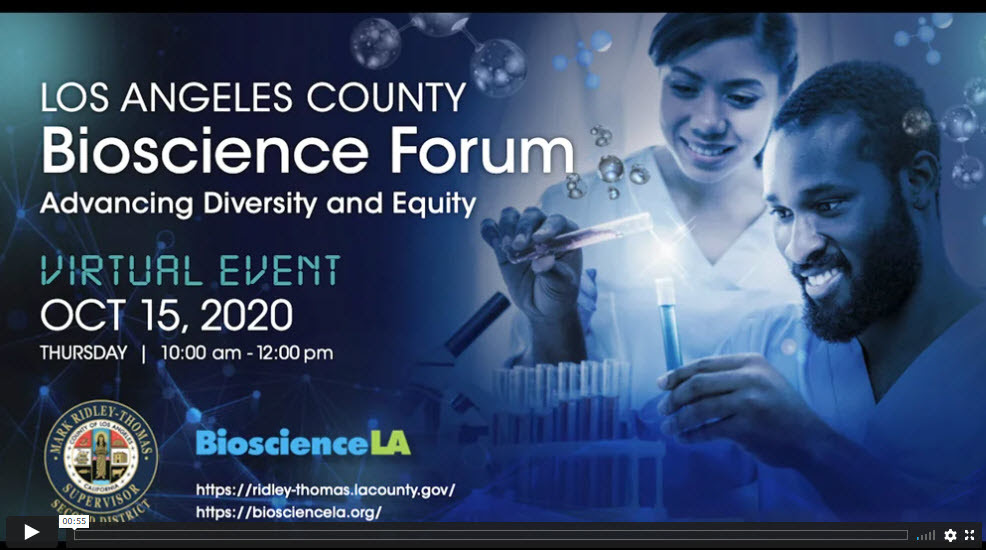 Los Angeles county – Today, scientists, engineers and executives from Los Angeles-based bioscience companies painted a vivid virtual picture of the industry’s racial inequities as well as the ability to save lives while creating jobs within the booming bioscience industry.

“Not only is our country in the middle of a significant reckoning over its history of racism and injustice, but this reckoning is occurring during a pandemic that has not shown any signs of relenting,” said Supervisor Ridley-Thomas.  “In the push for testing, vaccines, and therapies, bioscience will play a significant role in any path forward, but the truth is communities of color are significantly underrepresented in the life science industry.”

Years ago, bioscience did not have as strong of a presence in Los Angeles County, especially in the Second District, making it more difficult for constituents to connect with the job opportunities arising from the industry’s steady growth. But five years ago, that changed with a motion in 2015 by Supervisor Ridley-Thomas. Following the motion’s approval, the Board of Supervisors directed the County to study key industries for job growth and economic development. The result was the development of a Countywide Bioscience Initiative that included a goal to create a workforce pipeline to diversify the industry.

“The County recognizes the moral imperative of this mandate for equality and to that end we have funded and helped develop the Bio-Flex program,” Supervisor Ridley-Thomas said. Bio-Flex, a first-in-the-nation apprenticeship training program, was launched in partnership with the South Bay Workforce Investment Board, Cal State Dominguez Hills, West LA College and the bioscience industry itself, including companies such as Bachem, Thermo Fisher Scientific, and Takeda to prepare persons of color and the economically disadvantaged for jobs in the bioscience industry.

“Bio-Flex is an employer-driven system,” said South Bay Workforce Investment Board Executive Director Jan Vogel.  “It is a career pathway program allowing students to get on the job training.”

“I learned the value of job readiness and explored the intersections of business, chemistry and biology,” said Bio-Flex graduate Aria Fulton who is now pursing a degree in biology at Loyola Marymount University.

This year’s Forum was part of the comprehensive countywide effort to increase local opportunities in the field of bioscience, which is increasingly important during the current economic downturn. In March of this year the County announced the first Bioscience Investment Fund through a public private partnership with bioscience investment firm MarsBio.

“Supporting a cohesive innovation ecosystem requires a coordinated approach to funding, space, and talent, among other areas,” explained David J. Whelan, Chief Executive Officer of BioscienceLA. “The County’s commitment to growing the entire sector has jumpstarted so many related initiatives, including BioscienceLA, and the momentum is increasing rapidly. Diversity and inclusion can accelerate innovation, and we look forward to continuing today’s conversations.”

While today was the first virtual forum, it is the third event of its kind in the County.  Last year’s in person forum was held at that hot-house of high-tech innovation, Google’s Spruce Goose Hanger. Last year’s forum highlighted how artificial intelligence is revolutionizing the medical field, with much of that transformative energy taking place in Los Angeles County.  And this year’s virtual forum was just one week after the first Los Angeles County Youth Bioscience Summit, focusing on ways Los Angeles County has invested in bioscience, highlighting strategies to be competitive for entry-level jobs and the various ways a degree in the life sciences touches a wide range of industries. Over 200 students from high schools and community colleges in Los Angeles County were in attendance.

“Our mission today is to explore ways that we can change this picture for a more inclusive tomorrow,” concluded the Supervisor.