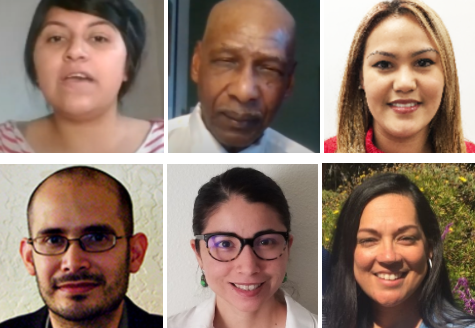 About 300,000 persons are at risk of losing their homes if the state’s moratorium on rent payments, due to end January 31st, is not extended. There are no permanent tenant protection laws.

Jessica Ramirez is 29 years old, is the mother of six children, and has an eviction on her record, which not only forced her to have to sleep in her car and in parks, and to get by on public charity, but has become an indelible stain on her record, which prevents her from getting housing.

“Even though I went to court, my eviction has not been removed [from the records]. Only the landlord has the right to do that,” said Ramirez, a Fresno resident who has become a strong community advocate in the fight for tenants’ rights. “I should not be forced to choose between my housing and the health and safety of my children just because I am a tenant.”

Ramirez spoke at a press conference organized by Ethnic Media Services that put a spotlight on housing rights in the midst of the pandemic in a region with the highest eviction rates in California, where more than 7 million people live: the Central Valley. Women of races other than white –mothers who are heads of households– are being disproportionately affected by this crisis.

In the midst of COVID-19, Ramirez has not been able to comply with Gov. Gavin Newsom’s shelter-in-place orders or the Centers for Disease Control and Prevention (CDC) guidelines. Getting a lease is already an odyssey as her eviction will not be removed from her credit record for seven years. When she was able to rent an apartment, she was not able to renew the lease and has received eviction notices without any previous communication.

“I don’t want anyone to experience what my kids are going through,” said Ramirez, who has joined other tenants under the umbrella of services from Faith in the Valley (FIV), a faith-based community organization in California’s Central Valley that documents the housing crisis and represents families in Fresno, Kern, Merced, Stanislaus and San Joaquin counties.

In 2019, before the start of the pandemic, FIV documented 12,000 evictions in those five counties, based on court records and at a time when unemployment was at its lowest after the 2008 crisis. “We know that outside of the courts, the number of evictions is twice as many and the pandemic has only worsened that crisis,” said Janine Nkosi, regional FIV advisor. “Evictions in the Central Valley happen at higher rates than anywhere else in California,” she added.

According to the data analyzed by FIV, the demand for unemployment benefits in this area increased 600% at the beginning of the pandemic in March, with 650,000 people looking for income relief. They now estimate that 100,000 households, or about 300,000 individuals, are at risk of eviction if the state’s moratorium on rent payments –due to end on January 31– is not extended.

“We need rent, mortgage and utility relief to keep families afloat,” Nkosi explained, mentioning the importance of assembly bills AB15 and AB16 that seek to expand the terms for COVID-19 rent debt and provide affordable housing for these tenants.

Nkosi shared the case of Fresno County, where in 2019 the most active landlord advocate handled 643 cases, while the most active tenant advocate represented only six cases. Unlike in criminal justice, the right to a public defender in this civil matter is null.

“The civil right to defense and the elimination of criminal records are our great demands,” Nkosi said. “An eviction not only stays on the record for seven years, but that represents 10 years of negative credit and tenants end up having to pay 25 times what they owe… We want laws that reduce that record to just six months and allow for a five-year moratorium on debt.”

The lack of affordable housing is an additional element to the recession. Among the 12 regions of California, the Central Valley has one of the lowest rates of homeownership and the highest rates of homes with multiple families.

According to data shared by Professor Edward Orozco Flores of UC Merced’s Labor and Community Center, only 49.5% of the residents here own a home, making the Central Valley the third place with the highest number of renters, after Los Angeles and San Diego.

There is an average of 10.7 homes with multiple families per 100 households, meaning that up to 10 families live in one house, highlighting the crisis of overcrowding and the impossibility of physical distancing that have made ethnic communities the biggest victims of this pandemic.

“There is a false idea that the cost of living in the Central Valley is low, because here we also have the second lowest wages in the state,” added Orozco Flores, referring to the most common occupations that are those of essential workers: agriculture and food processing.

Many of these workers live on food stamps because they have to spend 30% to 50% of their income on paying rent, which is referred to as an “extreme rent burden.”

On top of that, “we have the highest unemployment rate… As a result of the pandemic, one in four households has lost or reduced their income and this is a problem for those who are tenants.”

In November of last year, Claude Bailey, a 79-year-old Stockton resident, was evicted from the apartment where he had lived for over 20 years. He had to live out of his car for 10 months, sleeping in the car, and went days without eating because he wanted to avoid using the disgusting public bathrooms, and was evicted by the police from parks and corners in his neighborhood. All this in the midst of the pandemic.

“It was a nightmare, I could barely sleep,” said Bailey who, thanks to the help of friends, recently found a shelter. “I lived in fear, I never knew where I was going to go, or what to do, I couldn’t relax because I was constantly on the move… I saw many older adults who have worked very hard for their families, abandoned to their fate on the streets, sleeping in boxes. This can happen to anyone,” he added.

Bailey wants legislators, property owners, and society at large to do their part. “A society is known for how it treats its elderly people. We pay our taxes and have built this country. It’s time for them to help us,” he concluded.