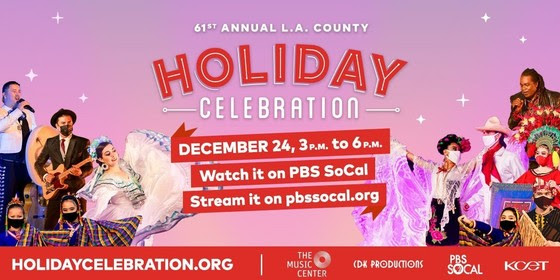 Los Angeles, CA— This Christmas Eve, the annual Los Angeles County Holiday Celebration will be all-virtual for the first time since Supervisor Kenny Hahn started the tradition in 1959.

In the late 1950s, when Dorothy Chandler asked for Supervisor Kenny Hahn’s support to build an arts complex in Downtown LA (now the Music Center and the Dorothy Chandler Pavilion), Hahn agreed, but only as long as the performing arts center would open its doors to the public for free every Christmas Eve.  Dorothy Chandler agreed, and the Annual LA County Holiday Celebration was born.

Every year, Hahn himself would hold auditions for local musicians, choirs, dance groups, and performers of all kind to try out for the program, often in his office in the Hall of Administration.  The program itself lasted all day with audience members staying for as long or as little as they would like before giving their seats to families in line outside.  Six decades later, the Holiday Celebration has become an important part of many family’s holiday traditions.

This year, the LA County Holiday Celebration will be all-virtual for the first time since it started sixty-one years ago.  Performances have been pre-recorded and there will not be any live performance at The Music Center.  The entire show will be broadcast on PBS SoCal, KCET, and streamed online.

“The LA County Holiday Celebration has always been a huge part of my family’s holiday traditions,” said Supervisor Janice Hahn, daughter of Supervisor Kenny Hahn. “In a holiday season that looks so different for so many, myself included, I am grateful that we have been able to keep this tradition alive. I will be watching the event from home this year and I hope it brings a little holiday cheer to your home as well.”