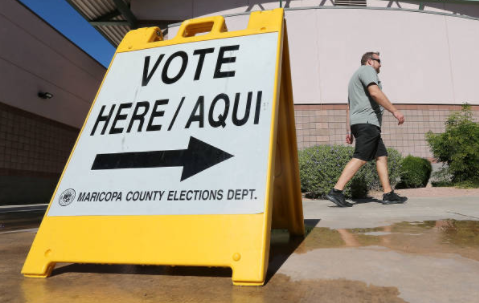 Washington Secretary of State Kim Wyman has an almost 30-year background as an elections official and is the only Republican official elected state-wide there. She was joined in the May 4 telebriefing by former Maricopa County elections official Tammy Patrick, and Matthew Masterson, former lead Senior Cybersecurity Advisor for the Department of Homeland Security.

Despite multiple previous audits of the election results, which found no evidence of mistakes or wrongdoing, State Sen. Karen Fann convinced her fellow Republicans controlling the legislative body to do a top-to-bottom examination of the ballots, voting machines and voting materials.

The Senate justified seeking the audit on grounds of ensuring future elections are properly conducted. Whatever the audit finds, there’s no chance of reversing the result of the presidential election of six months ago.

The audit is being conducted by a small Florida-based company called Cyber Ninjas, that has no prior relevant experience in such work, and has hired subcontractors.

“I think the thing that I’m most disturbed about with what’s happening in Arizona,” Wyman said, “is this partisan nature of the recount or audit. The biggest problem with it is that there are no rules or accountability that are built into the system in the way you would with election laws and procedures and policies.

“They’re not defining who’s eligible to participate, or watch, or challenge the outcome of the recount. Who set the rules, who’s paying for it? All of these things are hidden from public view.”

“We’re putting our democracy at risk.”

The Arizona Senate has allocated $150,000 for the audit, but Cyber Ninjas is expecting to be paid more than that, although it’s not saying by whom.

GOP-friendly sources such as the lawyer Sidney Powell, who led Trump campaign post-election challenges to its results, and the America One News Network are reportedly also raising funds for the effort, under way since April 23 in a coliseum space the Senate has rented through May 14.

In response to a lawsuit filed by the Arizona Democratic Party and Maricopa County officials, Cyber Ninjas has been ordered to be more open about its audit methodology, but has been slow to comply.

Patrick described some of the mysteries surrounding the current audit’s reported use of ultraviolet lights, pens capable of altering or spoiling ballots that would normally be prohibited, examination of folds and variations in the printing of the ballots that are common in any election.

Also unknown is who is inspecting the ballots, and who is allowed to observe them at work. Typically, recounts are done by bipartisan teams and with rules about how election materials are to be handled.

The process can be glimpsed at a great distance through live-streaming America One News Network cameras accessible at azaudit.org.

“This is not something that occurs in a healthy democratic process,” Patrick said. “There were officially sanctioned audits already, by both parties. A hand-count audit has already been done.”

“This election in the midst of a global pandemic was fair and accurate, run securely, audited and litigated,” Masterson said. He also cited intelligence community studies finding “no evidence of any successful infiltration of election infrastructure.”

What the intelligence community did find, however, he said, was “a pervasive campaign to undermine trust in elections,” conducted in part by Russia and Iran.

“The degradation of trust is nothing less than a security threat.”

“Other states are watching,” said Wyman, who expects the audit, given its partisan nature, to conclude there were anomalies in the election, even if it has no authority to change the outcome.

“Once the election is over, we move forward together. This is problematic. Other states are looking at this,” Patrick said.

“They’re setting forth policies to be surer than sure that there’s going to be differences.”

The real purpose of the audit, the panelists concurred, is to stoke distrust in the election process and raise money for those who don’t like the latest outcomes.

“I don’t think you can make the process credible at this point,” Wyman said. “They have now contaminated and corrupted those 2.1 million ballots that Maricopa County so meticulously protected. That cow left the barn a long time ago.”