The city of Zibo in East China’s Shandong province signed a memorandum of understanding on May 13 on establishing friendly and cooperative relations with Haute Matsiatra Region in Madagascar.

Cai Xianjin, director of the foreign affairs office of Shandong, stated in his speech that Madagascar is an important African partner for Shandong province, and this year marks the 50th anniversary of the establishment of diplomatic ties between China and Madagascar.

Madagascar is also one of Zibo’s most important African economic and trade partners, and the cooperation between the two in textiles, fertilizer, steel, mechanical products and electrical products is getting stronger and stronger, according to Ma Xiaolei, mayor of Zibo.

“Deepening cooperation between Zibo and Haute Matsiatra Region will open a new chapter in the partnership between the two,” he said.

Ma hoped that the two sides will take this opportunity to further deepen exchange and cooperation in industry, agriculture, tourism and medical care.

Madagascar is located in southeastern Africa. One of Madagascar’s 23 regions, Haute Matsiatra Region, is located in the center of the country. It covers an area of 20,883 square kilometers and has a population of about 1.5 million. 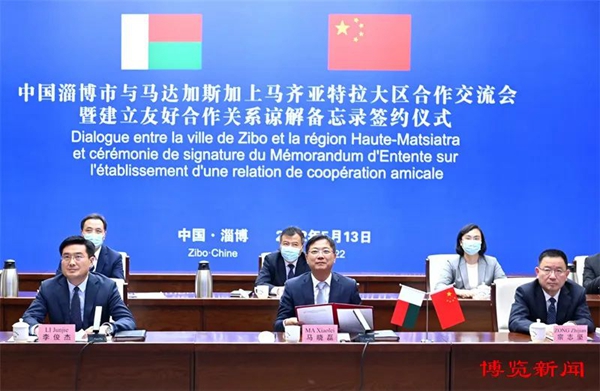 Zibo establishes friendly and cooperative relations with Haute Matsiatra Region in Madagascar on May 13. [Photo/zbnews.net]