COSTA MESA, CA – Guests of the 48th annual Candlelight Concert transcended away to the city that never sleeps for a night of 1980’s New York elegance on Friday, December 2, for the premier charity gala of Orange County. Guests arrived at an immersive replica of America’s most beloved Central Park. The elevator lobby was transformed into a luminous garden, with luscious greenery and dim lighting to give an outdoor feel. The angularity of the Fire Bird art installation was used to represent the myriad of angles that comprise the Brooklyn Bridge, transforming the terrace into a geometric celebration of the New York skyline. The stage sparkled with a large Brooklyn Bridge. Guests filled the halls with laughter, and enjoyed live entertainment and rich Italian cuisine, while they celebrated in the big apple ambiance. The tabletops were decorated with a variety of white floral mercury cut glass and, bud vases accented with dark green leaves. The evening provided critical funds to benefit Segerstrom Center for the Arts’ nonprofit initiatives==from world-class artistic programming to signature Education and Community Engagement programs like Studio D: Arts School for All Abilities, American Ballet Theatre William J. Gillespie School, and ArtsTeach. The funds also support new endeavors such as commissions, productions, and world premieres. Along with the celebrating, laughing, and dancing, the Center was able to raise $3.1 million for its nonprofit initiatives. 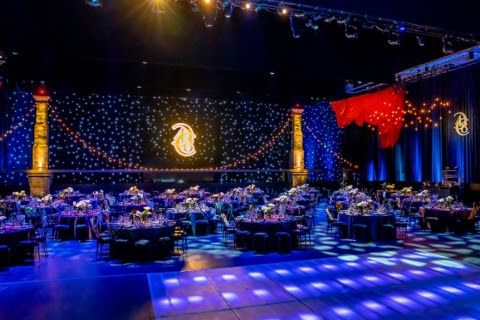 Remarks were given by Segerstrom Center for the Arts President, Casey Reitz, Chairwoman of the Board Jane Fujishige Yada, and 2022 Candlelight Concert Chair John E. Stratman, Jr. High praise was lauded to all donors for their gracious support and fundraising. Guests had a special surprise when celebrity chef for the evening’s dinner, Giada di Laurentis, made her way on stage and said a few remarks.

Chairwoman of the Board, Jane Fujishige Yada shared “Candlelight has been a longtime tradition at the Center, even before we opened our doors. A tradition meant to celebrate the importance of the performing arts to our audiences, students, artists, and the entire Orange County community.” She also thanked the entire Board of Directors of Segerstrom Center for the Arts and gave heartfelt recognition and appreciation to top sponsors and contributors including The Argyros Family Foundation, Elizabeth Segerstrom, Sandy Segerstrom Daniels, Britt and Bob Meyer, Sally Segerstrom, Jane and Jim Driscoll, Kaiser Permanente, and Moti and Idit Ferder with Presenting Jewelry Sponsor, Lugano Diamonds.

John E. Stratman shared “It’s truly been an honor to chair this 48th Candlelight Concert.” He thanked everyone for sharing in the success and announced $3.1 million was raised in support of the Center.

Guests were entertained with an 80’s pop music whirlwind. The Brooklyn-born, Grammy, Emmy and Tony winning superstar Cyndi Lauper was the headliner of the evening. Casey Reitz, President for Segerstrom Center for the Arts shared “Cyndi is the perfect artist to celebrate the Center and our commitment to Broadway. Cyndi is passionate about Broadway. Her musical KINKY BOOTS won 6 Tony Awards, including her Best Original Score and Best Musical. It ran for 6 years for over 2,500 performances on Broadway and also appeared on this very stage in Segerstrom Hall twice in 2014 and 2018.” Lauper gave an electrifying performance like no other and stunned guests while performing some of her most iconic pop hits including “Time After Time”, “True Colors” and “Girls Just Want to Have Fun”. The concert was exciting and warmly received by the audience who gave Lauper a standing ovation through the encore songs. Following Lauper, guests continued to celebrate with a Studio 54 themed dance party with legendary southern California radio, television, and film personality DJ Richard Blade. Guests danced the night away as he spun the 1 and 2’s rocking some wave music and electronica.

As guests danced the night away, New York-style pizza and Giada’s cookies were enjoyed as late-night bites. In the Valet Lounge, guests enjoyed New York espressos as their night cap to their evening amongst the city lights. Gifts by Presenting Jewelry Sponsor, Lugano Diamonds, were shared.

The highly regarded Chef and Emmy award-winning television personality, Giada De Laurentis, provided the cuisine for the evening. Giada De Laurentis is a very successful restaurateur with restaurants GIADA and Pronto by Giada in Las Vegas, both regarded for offering a divine dining experience. On this special night, she curated a decadent arrangement of Italian plates.