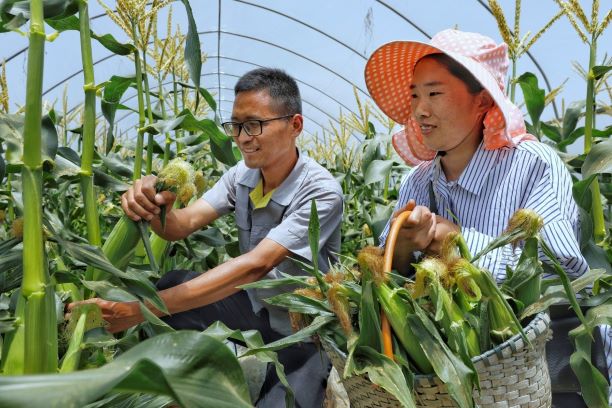 Farmers of a cooperative in Leyu township, Zhangjiakang pluck corns on May 13. Photo by Shi Bairong/People’s Daily Online

Zhangjiagang Bay in East China’s Jiangsu Province is the last major curve of the Yangtze River before it flows into the sea. For 69-year-old Fang Jinfu, who lives in Yongxing village near the bay, the river bank, in his childhood, was like a green carpet stretching infinitely, with a lot of crabs and resounding chirping.

At that time, he would always dig for wild vegetables and catch crabs with his friends in the summer. However, the natural environment along the river began deteriorating since the 1990s, when shipyards and docks sprang up and villagers started aquaculture along the riverside.

Fortunately, a large-scale campaign was launched in the second half of 2019 to demolish unapproved construction and weed out inefficient shipyard companies and aquaculture industries, as a way to restore the riverside environment. Yongxing village also joined the rehabilitation efforts.

Fang was the first in his village to take down unapproved building, to close the aquatic plant and to sign an agreement on relocation compensation.

Fang and his family left the old house they had lived in for decades, in an effort to support the environment rehabilitation. “I didn’t want to leave the old house, but I know it was for the good of my hometown,” he said.

The efforts paid off quickly. In less than a year, the river bank turned green again thanks to the comprehensive treatment and ecological remediation. A nine-kilometer ecological corridor, bird observation stations, and a 100-meter gallery have been established along the Zhangjiagang Bay, bringing a new look to the riverside.

The presence of birds is a barometer of ecological health. Every three months, Zhou Minjun, an ornithologist from Suzhou Wetland Nature School in Zhangjiagang’s neighboring city, comes to Shuangshan Island opposite the Zhangjiagang Bay to observe birds.

He spotted three reed parrotbills playing in the reeds on April 25. The endangered species requires high quality standards for habitat, and their presence indicated the improving ecology, he told the People’s Daily.

“Today’s river bank sees lush reed beds and more crabs. The river has become beautiful again,” said Fang. He enjoys taking a walk to his old house, as the river is clearer and more trees are planted by the bank.

With the greening of the river bank, the villages nearby also found new opportunities for development. Yongxing village is making new strides in building itself into an ecological and idyllic village for sightseeing.

“Great changes have taken place in the village over the past six months,” said Guo Chunzhong, deputy Party head of the village, introducing that an ecological park consisting of an agritainment facility, an orchard for visitors to pluck fruits, and a B&B has been built.

The village has also established a company, with an aim of building an idyllic complex to translate the ecological benefits into improved income for the villagers.