LOS ANGELES, CA (April 7, 2021) – Los Angeles Board of Public Works Commissioner Jessica Caloza has received the 2021 Community Champion Award from the Philippine American Bar Association (PABA) during its 34th Annual Installation and Virtual Awards Gala on Tuesday evening. Based in Los Angeles, PABA is the oldest and largest local association of Filipino American attorneys in the United States. The Community Champion Award is presented annually to someone whose work uplifts, promotes, and strengthens the local Filipino American community. 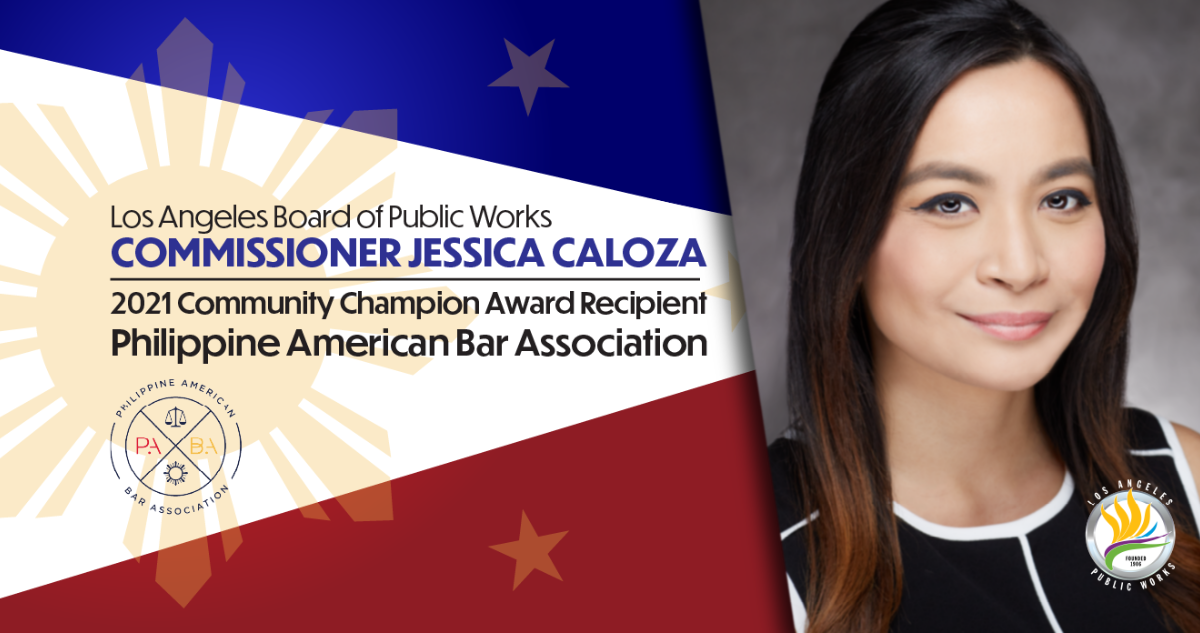 “I’d like to thank PABA for this special recognition and for all of its work to support the Asian and Filipino American community,” said Commissioner Caloza. “My hope is to inspire others to serve, give back, and help, because together I know we can make a positive difference. This pandemic has shown us that we need to uplift each other and support our most vulnerable, including the Asian American community given the rise in attacks and violence. Each of us has a role to play in being community champions.”

Appointed by Mayor Eric Garcetti and confirmed by the City Council in March 2019, Commissioner Caloza is the first Filipina American to serve on the Board of Public Works. She was recognized with this award for her leadership overseeing the City of Los Angeles’ most critical infrastructure projects and core services that improve the quality of life for its more than four million residents. During her time on the Board, she has organized the City’s inaugural Filipino American History Month Lighting Ceremony, brought attention to Historic Filipinotown through initiatives like the Eastern Gateway project in collaboration with Councilmember Mitch O’Farrell and artist Eliseo Art Silva, and promoted the contributions of Asian and Filipino Americans to Los Angeles.

During the COVID-19 crisis, she worked to ensure that local and small businesses continued to receive critical business resources by hosting the first-ever virtual Accessing L.A. webinar series in lieu of the annual in-person networking event. Additionally, she worked with PABA to launch a non-partisan voter hotline providing assistance and vital information to help community members make their voices heard in the 2020 election. Through these and many other efforts, Commissioner Caloza has shown her commitment to community building and advancing equity and inclusion for the Filipino American community and all underrepresented groups.

“I couldn’t think of a more deserving recipient for this year’s Community Champion. I’ve had the honor of witnessing Jessica firsthand in her outreach to, and collaboration with, Filipino American and greater Asian American communities in terms of representation, rights, and services to these often-overlooked populations,” said PABA President Abigail Zelenski. “With the unfortunate rise in anti-AAPI hate, Jessica has taken a prominent leadership role in bringing people together to come up with proactive ways we can combat hate incidents and hate crimes. Jessica truly embodies what it means to act as a public servant. We thank Jessica for all of her community work, and PABA looks forward to continuing to work with her on projects that help the Filipino American community.”

Los Angeles County is home to over half a million Filipino Americans – the largest population of Filipinos in the world outside of the Philippines. Many Filipinos are making meaningful contributions to our communities as public servants with representation at the highest levels throughout the City of Los Angeles. Many of these employees have been serving as essential workers to keep core services running as we continue to battle the COVID-19 pandemic. The Filipino American employees in the Department of Public Works, and throughout the City, are making impactful contributions that benefit all Angelenos, promoting diversity and inclusion in the workplace, and inspiring future generations of public servants.