Southern California Chinese Commemorate the 50th Anniversary of “Ping Pong Diplomacy” to Help U.S.-China Relations Get Back on the Right Track

Los Angeles, March 21, 2022 – The United States Table Tennis Association and the All American Chinese Association held a series of celebrations in Los Angeles on March 20 to commemorate the famous “Ping-Pong Diplomacy” in the history of civil public diplomacy between the United States and China 50th anniversary.

Former US National Table Tennis Team members Dell Sweeris and Connie Sweeris, who experienced “ping pong diplomacy” in person, and Jan Berris, Vice President of the National Committee on US-China Relations, made a special trip to Los Angeles to participate in the day’s activities and attended the event, shared their experiences 50 year ago in the forum. Zhang Ping, Consul General of China in Los Angeles, and Virginia Sung, CEO of the US Table Tennis Association, kicked off the series of commemorative events with a mixed doubles match. Liu Guoliang, Chairman of the Chinese Table Tennis Association, delivered a speech at the forum via video. 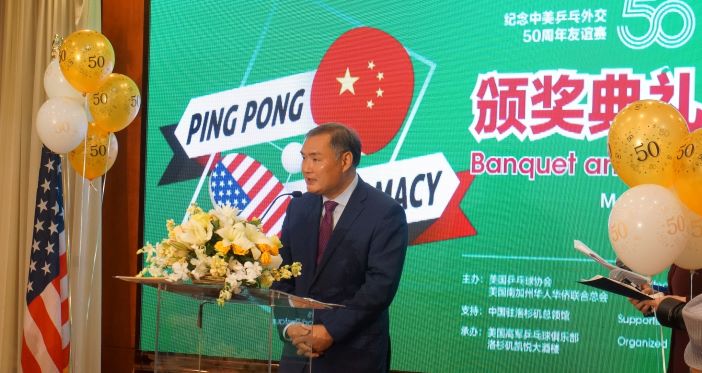 Zhang Ping, Consul General of the People’s Republic of China in Los Angeles

Zhang Ping, Consul General of the People’s Republic of China in Los Angeles, said in his speech. “China-US ping-pong diplomacy ended the 22-year isolation of personnel exchanges between the two countries, and played an important role in promoting the realization of the “handshake across the Pacific Ocean” between China and the United States. Today, the legacy of “ping-pong diplomacy” is felt by the younger generation of China and the United States. It is of great practical significance to inherit and carry forward the precious legacy of “ping-pong diplomacy”.”

In his speech, Chinese Consul General in Los Angeles Zhang Ping hoped: “Maintaining a stable and healthy Sino-US relationship is not only the common aspiration of the Chinese and American people, but also the general expectation of the international community. Today, the “big ball” of Sino-US relations still needs Lots of ‘small balls’ like ping pong balls to push.” 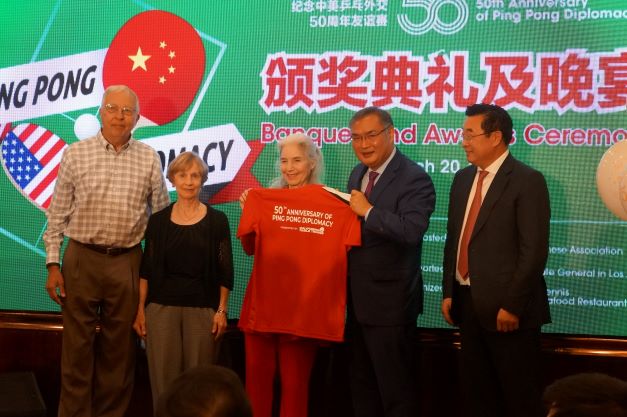 Jan Berris, vice chairman of the National Committee on U.S.-China Relations (NCUSCE), who has participated in hosting the Chinese table tennis team to visit the United States since 1972 and has visited China 165 times so far, appealed with her 50 years of experience in people-to-people diplomacy. The Chinese people should continue to strengthen dialogue and communication to push the relationship between the two countries back on the right track. She is also convinced that the friendship between the two peoples will continue to be maintained.

In their speeches, Dell Sweeris and Connie Sweeris recalled the scene when he was received by Premier Zhou Enlai when he visited China as an American table tennis player 50 years ago, and the cordial and friendly friendship of the Chinese people. They emphasized that the young people of the two countries inherit the spirit of “ping-pong diplomacy”, which is of great significance to promoting the relationship between the United States and China.

“We have celebrated this event for 50 years, and we have witnessed the evolution of Ping Pong Diplomacy, From an exchange between two countries that ended the Cold War to the interdependence of two countries that its peace ensures the peace of the world.” said Virginia Sung, CEO of the US Table Tennis Association in her speech. “We are often told not to combine sports and politics. Contrary to that belief, today’s celebration proves we can use the best qualities of sportsmanship to set positive standards of diplomacy as athletes and as leaders. When we combine the spirit of friendship and solidarity, with peace and humanity, we bring out the best in ourselves and each other, and this is why we can repeat the timeless tale again and again and this is how we are going to continue its legacy year after year.”

Cai Chenghua, president of the Southern California Overseas Chinese Federation, who initiated and hosted the series of celebrations that day, said that 50 years ago, after the exchange between the American table tennis team and the Chinese table tennis team, the non-governmental exchanges between China and the United States and the friendship between the two peoples keep deepening. The purpose of hosting the series of activities on the day is to keep this history in mind, express the expectations of the Chinese in the United States for the US-China relationship, and hope that the US-China relationship will return to a normal track. 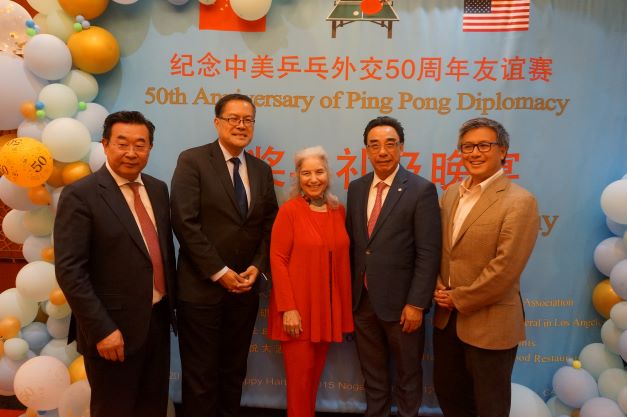 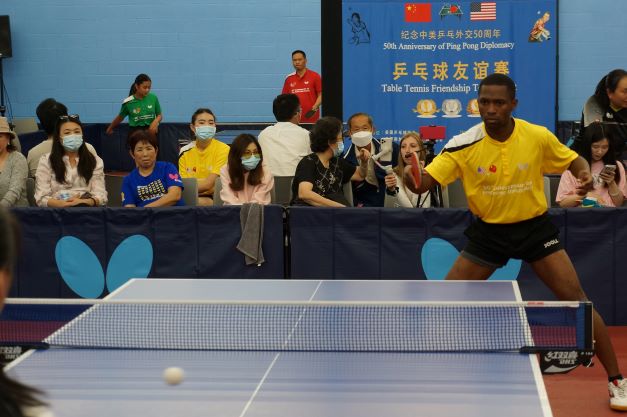 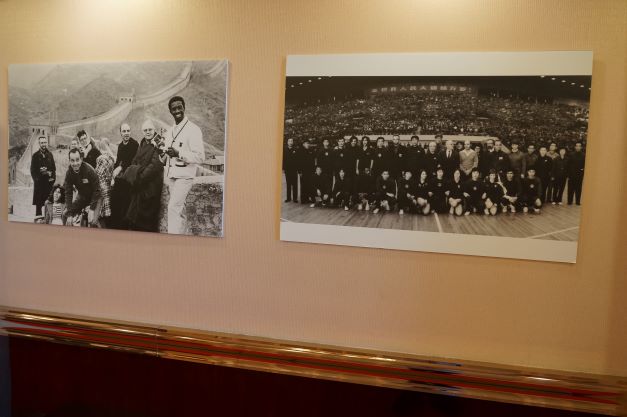 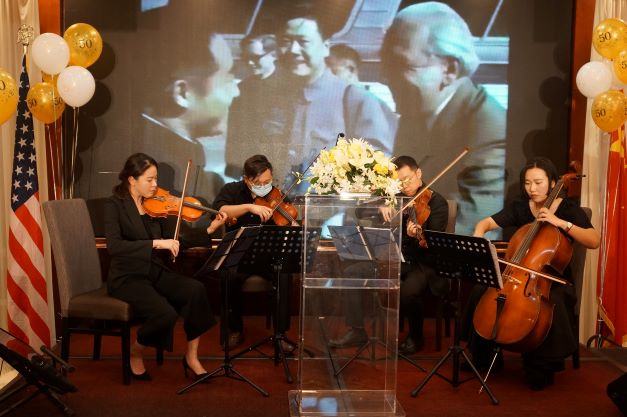