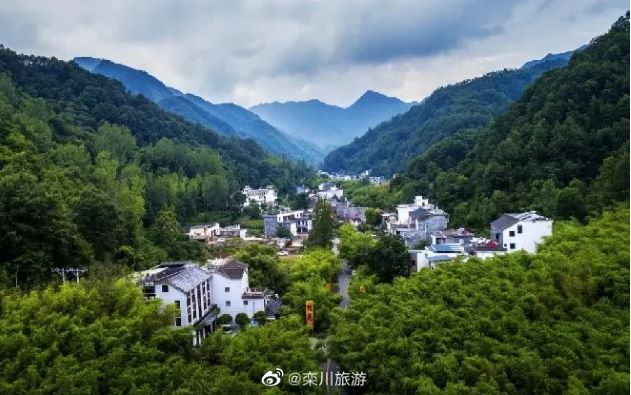 By developing rural tourism in recent years, a village in Central China’s Henan Province, has been lifted out of poverty.

Located in Luanchuan county, Henan Province, Cangfang village boasts lush mountains and lucid waters, yet the villagers were stricken by poverty for a long time for failing to make use of the natural advantages.

The average per capita earnings of the villagers were around 2,000 yuan (about $285.6) in 2013 and 112 out of the 185 households in the village suffered from poverty, according to Wang Qingxian, head of the villagers’ committee.

“Due to the limited and infertile farmland in the mountain village, the locals couldn’t make money by farming,” Li Yinsheng, a resident in Cangfang, told the People’s Daily, adding that his family of six had only about 3,330 square meters of land.

For a time, the villagers tried to cut down trees and grow crops on the hills. However, they still couldn’t make much profit this way, according to Li.

As a result, many young villagers left their hometown for the cities, including Li, who left the village when he was 20.

However, with little education and skills, he wasn’t able to make ends meet, given the expensive cost of living in the city. After years of struggling, he had to return home to take care of his aged parents.

Chongdu village, located on the other side of the mountain, is developing prosperously with similar natural conditions as Cangfang.

By promoting rural tourism, the villagers in Chongdu have embraced a better-off life. As of the end of 2013, the per capita income of the villagers reached 30,000 yuan, and houses and cars were affordable for almost every household.

How Chongdu village, which was less developed than Cangfang, turned out to be prosperous, became a dinner conversation for Cangfang villagers. After discussion, they agreed that rural tourism and transportation were the keys to Chongdu’s success.

Li believed that what Cangfang village needed were not only roads, but also a way of poverty alleviation enabling the village to generate revenue out of its lush mountains and lucid waters, just as Chongdu village did.

As expected by the villagers in Cangfang, a highway from Luoyang, Henan, to Luanchuan county, opened to public at the beginning of 2013, with part of its section passing Cangfang village.

Under the government’s policy of targeted poverty alleviation, a wildlife park was built in the village, making its rugged mountains and lush bamboo groves a great resort for tourists.

By transferring the land-use right of the wildlife park, the villagers could gain both rent and dividends, and even get paid working in the park.

Data suggest that the project has brought an annual income of over 6,000 yuan for each household in the village, plus three million yuan for villagers working in the park.

“The wildlife park has attracted many tourists, some of whom even had difficulty finding a parking space during the peak season,” Li noted, who then sensed a new opportunity to develop agritainment business.

With the help of poverty alleviation officials, Li has become quite familiar with the related policies. The government will provide an interest-free microfinance loan of 100,000 yuan for entrepreneurs in poor areas, an interest-free special loan of 30,000 yuan that requires other poor households as a guarantee, a subsidy of 3,000 yuan for poor families applying for poverty alleviation projects, and a maximum subsidy of 60,000 yuan for poor families that aim to develop rural tourism.

By taking out loans and raising funds himself, together with over 100,000 funds from the government, Li renovated his house and turned it into a bed and breakfast (B&B), which was put into operation at the end of 2015.

Li and his wife took the free courses provided by the local government, learning about cooking, reception etiquette and hotel housekeeping. Li also proactively learnt from the experience of the B&B facilities in Chongdu.

“The business is gradually booming and the rooms are even all booked up during the holidays,” said Li.

More and more villagers have become better off by protecting the environment and developing rural tourism, and Cangfang village has made a rule to prohibit reclaiming the wasteland and cutting down trees to grow crops.

Forty-two B&B facilities have opened in the village, generating an average annual income of about 30,000 yuan for each one of them, said Wang, adding that all poverty-stricken households in the village had been lifted out of poverty by the end of 2019, either by selling local products or securing a job in the village.

However, the thriving tourism in Chongdu has caused serious pollution in recent years, as 8,000 tons of wastewater has been discharged every day, Li pointed out.

Under the guidance of the government, an administrative committee of the Chongdu scenic area was established, where Chongdu village and surrounding eight villages work together to upgrade the B&B hotels by reducing the number of beds and improving the quality of service.

Meanwhile, visitors that stay at the B&B in surrounding villages will receive ticket discounts and infrastructure concerning sewage treatment is enhanced.

While protecting the environment, more villages in Luanchuan county have developed rural tourism. The county has established 23 ecological parks and 1,442 B&B facilities, lifting 13,000 people out of poverty through rural tourism.

Now, Li is planning to make some of his B&B rooms bamboo-themed. “I’m more convinced that protecting the environment and developing rural tourism will bring more sustainable development to the village,” he said.