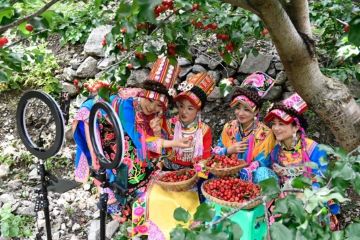 While traditional industries suffer from the impact of the COVID-19 pandemic, emerging professions and new types of work are helping stabilizing China’s employment market by bringing about new job growth and filling gaps in the market.

Recently, China’s Ministry of Human Resources and Social Security planned to add 10 new professions, including online marketers, and eight new types of work, such as livestreaming salesperson, to its occupation list.

In fact, new professions in China have drawn great attention from the public since March, when the country gave official recognition of 16 new professions, including respiratory therapists and delivery personnel for online orders.

Employment is a barometer of the economy. These new professions reflect the vitality and resilience of the Chinese economy, and bring new vigor and hope.

China logged a 5.9-percent surveyed unemployment rate in urban areas in May, down 0.1 percentage point from the previous month.

The hard-won decline indicated that the country’s employment situation, though hit by the COVID-19 pandemic, remained stable.

Emerging professions, which open up new possibilities for job hunters, have played an important part in maintaining stable employment.

It must be understood that new professions don’t come out of thin air. They are the natural results of the continuous growth of new driving forces of the Chinese economy.

Although the COVID-19 pandemic continues to rage across the world and has led to decline of overseas demand and rising downturn pressure on domestic economy, new businesses, models and industries have been emerging across China, together with new professions needed in various forms of businesses in engineering and technical field as well as the modern service industry.

In particular, as the country makes efforts to coordinate regular epidemic prevention and control and economic and social development, digital economy represented by such activities as online education, livestream marketing, grocery e-commerce, and Internet-based medical services have witnessed a boom, bringing about a multitude of new professions and a rise in recruitment needs of enterprises in digital economy.

New as they are, many emerging professions are in great demand, represent elaborate division of labor, and have strict requirements for expertise, thus being particularly helpful for boosting employment.

New professions not only mean different work experiences, but also represent broader prospects for employment and more opportunities for career transition. Besides, they enrich the career choices of key job seekers such as college graduates.

A report has shown that the recruitment needs of China’s livestreaming industry had surged by about 134.5 percent year-on-year from January 1 to June 15.

All these emerging professions enjoy bright prospects for employment, whether they have arisen from the technical innovations of manufacturing and construction industry, or resulted from the rapid development of the modern service industry, or come from the enormous demand for health care services.

Since most of the new jobs are related to digital economy, they are typically free from the limitation of time and space.

Such new professions as food deliverymen, designated drivers, online ride-hailing drivers, livestreaming hosts, short video producers, and shared employees, are all characterized by fragmented job tasks and flexible work arrangement, which makes them great opportunities for people who seek part-time jobs for better use of their spare time and fragmented time.

With encouragement and guidance from relevant authorities, these emerging professions and types of work can play a significant role in stabilizing employment.

As it’s believed that the fundamentals of China’s long-term stable and sound economic development remain unchanged and will not change, various local governments and departments across the country are intensifying efforts to give priority to employment, rolling out a series of policies on supporting enterprises and stabilizing employment.

With employment situation in traditional industries gradually becoming stable and new professions and new types of work continuously lifting employment figures in emerging industries, China is confident about and capable of guaranteeing adequate jobs for its people and maintaining overall stability in its job market.