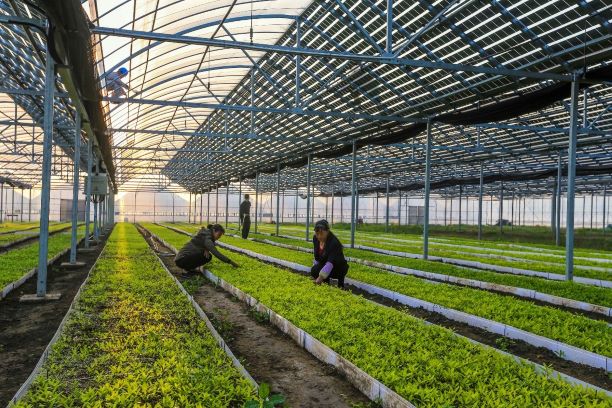 You have probably heard the anecdotes about the enthusiasm for vegetable growing of the overseas Chinese. When the Chinese move into a house in a foreign country, they always replace the flowers in the garden with coriander and scallions.

Such stories are also commonly heard in China. Though more and more cheap and fresh vegetables are being placed on the shelves of supermarkets and farm produce markets in an increasingly larger variety, the Chinese people’s enthusiasm for growing vegetables themselves never fades.

In front of and behind houses, at the corners of balconies, and even on the roofs of skyscrapers, there are always vegetables planted in small pieces of soil. Apart from that, some people are trying new methods to get the pleasure of growing vegetables. They build virtual farms in smart phones where they plant their own seeds and weed their friends virtual farms.

Growing vegetables is an experience that many Chinese are trying to get, in both reality and the virtual world. And why is that?

In China’s pragmatic but romantic culture, plotting always comes along with studying, and the two together make an ideal lifestyle. Plotting solves the stomach problem, while studying satisfies the hunger for knowledge. Such idyllic cultural gene explains the nation’s love for the land and nature.

Today, smarter technologies have been applied to vegetable growing, endowing it with richer connotation.

In the Republic of South Sudan, China’s peacekeeping troops built a “blue helmet farm” that both satisfies the soldiers’ demand and offers free vegetables to the local people. Some joked that the vegetables are created by the Chinese with “magic.” In China’s Great Wall Station in Antarctica, Chinese scientists plant vegetables in the world’s first greenhouse in the South Pole, which enabled them to have Chinese chives dumplings on the Chinese New Year. Even in the outer space, Chinese astronaut Jing Haipeng broadcasted how he cultivated vegetables in the Tiangong-2 space lab.

As a matter of fact, the Chinese aren’t born with the skills to grow vegetables, and what they have are the beliefs that the heaven rewards the diligent and hard work forever pays. Such beliefs come from the profound affection established between the Chinese nation and the land over the past thousands of years.

Harvests come from hard work. It is an experience passed on through generations in China, and will be carried forward to further destinations as the Chinese people are closely following the trend of globalization.